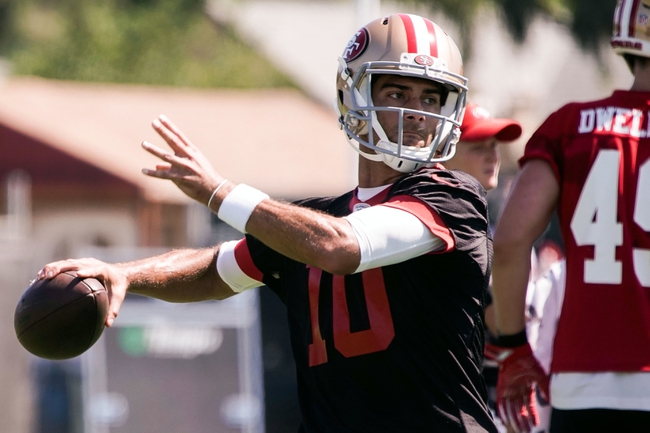 The Dallas Cowboys will look a lot different this season and there’s going to be more pressure on quarterback Dak Prescott to prove he’s more than a system quarterback. With a lot of weapons gone, Prescott will have to build chemistry with a new group of wide receivers and find other guys to rely on other than workhorse running back Ezekiel Elliott. Regardless, expect to see a ton of backup quarterbacks Cooper Rush and Mike White, two guys who tore it up in college but have to earn their stripes on the pro level. Defensively, it’s worth watching to see if first round pick Leighton Vander Esch can handle being thrown into a starting linebacker role, if Kony Ealy can climb up the defensive linemen depth chart and finally start taping into that potential. The Dallas Cowboys are set at a lot of positions, but you don’t quite get the same feeling with this group as you had in the past. It’s a weird feeling I have with the Cowboys. Maybe some preseason games change that.

The San Francisco 49ers head into the preseason with a lot of optimism thanks to quarterback Jimmy Garoppolo, and he’s expected to play at least one series in this game. Other than getting their starting quarterback comfortable, the 49ers must get a new offensive line up to speed, as left guard Jonathan Cooper, center Weston Richburg and right tackle Mike McGlinchey weren’t on this team last season. Making sure this offensive line is ready to go and can rely on the man next to them should be the top priority for the 49ers over this next month. Defensively, the 49ers have most of their starters intact, assuming Richard Sherman isn’t impacted long term with a hamstring injury. I’ll be watching rookie defensive back D.J. Reed, as he’s impressed so far in camp and is a playmaker both defensively and special teams. Reed could fly up the depth chart with some impressive minutes in the preseason. The San Francisco 49ers are worth keeping an eye on early, as there’s betting value with this sleeper in the NFC.

I say it a lot, but I'm not trying to lay big chalk in preseason games. You can breakdown the rosters as much as you want, figure out who is playing how long and throw as many trends out as you want. The bottom line is these games are tightly lined and you should always expect the unexpected in exhibition play. The goal for teams isn't even to win, it's to figure out who will make the team in three weeks. So, if I can get three free points with a hook, I'm taking it more times than not. It's where the value is for me in a game where 80 guys are going to play. So, Cowboys it is...