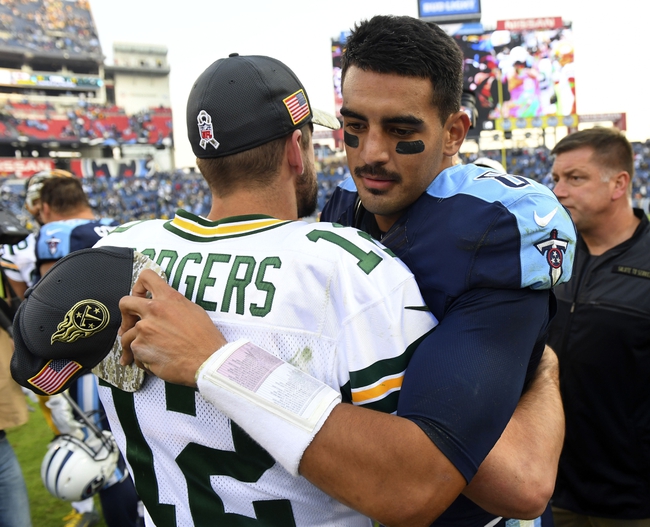 We have some Week 1 NFL preseason action on Thursday night as the Tennessee Titans take on the Green Bay Packers from Lambeau Field.

The Tennessee Titans will be looking to build on a decent 2017-18 season that saw the Titans finish 9-7 which was good enough for their first playoff berth since 2008 and overcoming a 21-3 halftime deficit in the Wild Card round to prevail 22-21 over Kansas City, winning their first playoff game since 2003 before being mowed down by New England in the divisional round. Marcus Mariota suffered through his worst season as a starter, putting up just 13 touchdowns compared to 15 interceptions in the regular season but will rely on receiving targets like former #5 overall pick Corey Davis, Rishard Matthews and pro bowl tight end Delanie Walker to regain some of his past form. The Titans bolstered their backfield by adding former Patriots running back Dion Lewis to form a solid 1-2 push to go along with Derrick Henry. The Titans’ D was bolstered with the signing of cornerback Malcolm Butler and by drafting a pair of rookie studs at linebacker with Rashaan Evans at 22 and Harold Landry at 41st overall. Time will tell if the Titans can finally emerge out of the shadow of their division foes to take the AFC South crown this season.

The Green Bay Packers will be looking for a bounce back season after seeing their string of eight consecutive playoff berths come to an end with a 7-9 mark, most of which was caused by quarterback Aaron Rodgers missing nearly half of the season with a fractured collarbone. A saving grace for Packers fans was his first season that was haunted by injuries back in 2013, saw Rodgers emerge as the league MVP the following season. The biggest question mark for the Packers offense this season will be how the loss of arguably Rodgers’ favorite target in Jordy Nelson, who was released in a cost-cutting measure, will affect the production. The answer may come in the form of the signing of all-star tight end Jimmy Graham who caught all 10 of his touchdowns in the red zone for the Seahawks last season. Davante Adams will look to pick up where he left off, racking up a solid 74 receptions for 85 yards and 10 TDs with a backup throwing to him for the majority of last season. Green Bay will hope that their top two draft picks in Jaire Alexander and Josh Jackson will help aid a cornerback position that has been lacking in recent seasons. Ha Ha Clinton-Dix will be expected to shake off what he himself described as a disappointing season to take on a bigger role in anchoring the Packers’ D after Morgan Burnett left for free agency. This could be the tightest that the NFC North has been in quite some time, so the Packers will need to stay healthy if they want to start a new postseason streak.

I’ve said before and I’ll say it again, betting on the preseason is all about who has the greater depth the lower strings and what teams have higher profile position battles going on. Tennessee’s lineup in pretty much set, and while Green Bay has the deeper team in my opinion, they also have backups at quarterback who were playing last year in Brett Hundley and the newly signed DeShone Kizer, who will be itching to get back onto the field and prove their worth to the Packers and to the rest of the league. Since we just have to worry about picking a winner in this one, I think the Packers at home should be the play here.