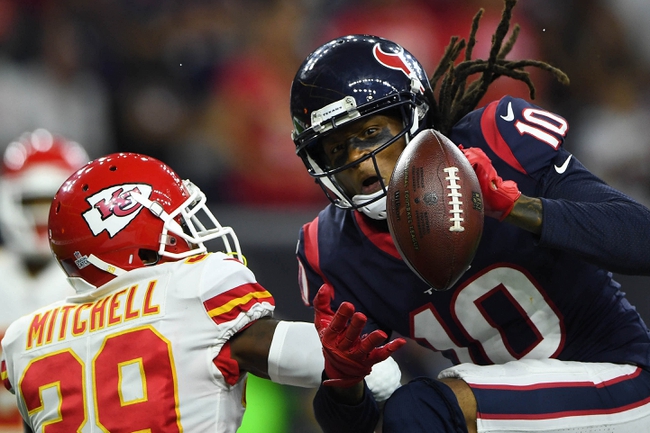 Thursday evening out at Arrowhead Stadium, the Houston Texans and the Kansas City Chiefs will be kicking off their respective preseasons in NFL activity.

Houston’s 2017 season was pretty abysmal. The Texans sputtered to a 4-12 finish (in the cellar of the AFC South) and posted their first losing season since 2013. Houston’s issues were compounded by the losses of QB Deshaun Watson, who tore his ACL in practice ahead of Week 10, and DE JJ Watt, who was injured in Week 5.

The Texans will try to forget all the bad luck of 2017 and focus on improvement this year. Watson will be back (and may even play in this game), and he’s got some solid weapons with WRs DeAndre Hopkins, Will Fuller and Sammie Coates alongside RB Lamar Miller.

Over on the Kansas City side, they had significantly more success in 2017, but things ended badly just the same. The Chiefs would finish the regular season at 10-6, bouncing back from four straight losses to win four straight and clinch the AFC West Division crown. In the Wild Card Game, Kansas City took at tough loss to the Titans 22-21, and their season was over.

It’ll be weird not seeing Alex Smith under center in KC this year, but new QB Patrick Mahomes could make us forget quickly. Mahomes is raw, but he does have a solid skill set and lots of capable targets including Tyreek Hill, Sammy Watkins, Kareem Hunt and Travis Kelce.

This should be an interesting year for both teams. The Texans will simply be looking to take a step forward, while the Chiefs—if things break their way—could be challenging for the lead in a very competitive division. There’s going to be a lot of “blah” QB play in this one, as neither Mahomes nor Watson (if he even plays) will be out there long. Depth-wise, I think that gives the advantage to the KC defense. I’ll go with the Chiefs here.