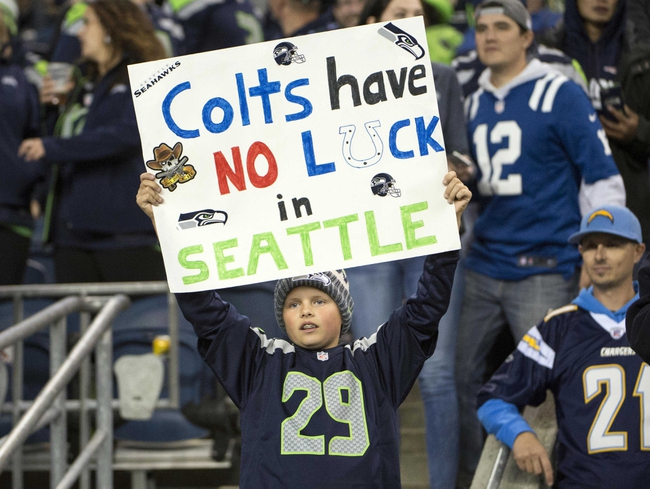 We have some Week 1 NFL preseason action from CenturyLink Field as the Indianapolis Colts take on the Seattle Seahawks.

The Indianapolis Colts will be looking to improve after a brutal 2017 campaign that saw Indy finish 4-12 leading to the firing of head coach Chuck Pagano who was replaced by Frank Reich for this season. Andrew Luck appears to finally be healthy enough to resume his duties as the Colts’ starting QB after missing the entire 2017 season following shoulder surgery. Indianapolis will need to protect Luck to keep his health in tact after allowing an NFL-leading 56 sacks last season. Marlon Mack will be turned to after the departure of Frank Gore after showing some signs of life in his rookie campaign with 358 rushing yards on 93 carries last season. T.Y. Hilton returns to lead the Colts’ receiving corps, with 57 receptions and 16.9 yards per reception, the highest average since his rookie year. On defense, Reich has changed the scheme and changed the mindset that the defense will be based on speed and athleticism after finishing near the bottom of the league in total yardage against, points against and sacks last season. Rookie Darius Leonard is expected to anchor the Colts’ linebackers in his first season while Jabaal Sheard will bump from linebacker to the defensive end. In the secondary, the Colts will be hoping for a solid sophomore campaign from Malik Hooker who had his rookie year cut short thanks to a knee injury. Only time will tell if Reich is the man to right the ship for the Colts and get Indianapolis back to the postseason, but he will need a healthy Andrew Luck and a lot of work to do so.

The Seattle Seahawks appear to be in a bit of an identity crisis after finishing 9-7 and missing out on the playoffs for the first time since 2011. Russell Wilson returns for another season at the helm of the Colts’ offense, after leading the NFL in touchdown passes with 34 last season, leading Seattle in rushing with 586 yards and breaking Eli Manning’s single season 4th quarter touchdown record with 18 touchdowns in the final 15 minutes last season. The Seahawks drafted Rashaas Penny from San Diego State to take over the starting running back duties after a strong college career at San Diego State. The Seahawks said goodbye to Jimmy Graham, but return their best receiver in Doug Baldwin and tight end Ed Dickson along with the likes of Tyler Lockett and Jaron Brown and new signee Brandon Marshall. On defense, Seattle will be looking to improve after allowing their most points in seven seasons (which coincides with the last time they missed the playoffs), giving up 332 total points last season. Earl Thomas is the last man standing from the once dominant secondary of Seattle, with the departure of Richard Sherman and a career-threatening neck injury to Kam Chancellor. Barkevious Mingo will be tasked to lead the pass rush for the Seahawks, alongside free agent pickup Tom Johnson. The linebacking corps remains mostly in tact, with Bobby Wagner and K.J. Wright still in tact as the league’s best 1-2 punch at linebacker.

Betting on the preseason is tough because you have to factor in depth and position battles as a lot of first stringers will barely see the field if at all. With that said, with all the turnover Seattle has had there’s still a ton of question marks regarding who will be taking the field in week one, but that leads me to believe there will be more effort shown in an effort to get playing time and I feel that the Seahawks have more starting spots and second string spots up for grabs than the Colts do. I think Seattle will do enough to cover the spread so I’ll lay the points with the Seahawks at home here.