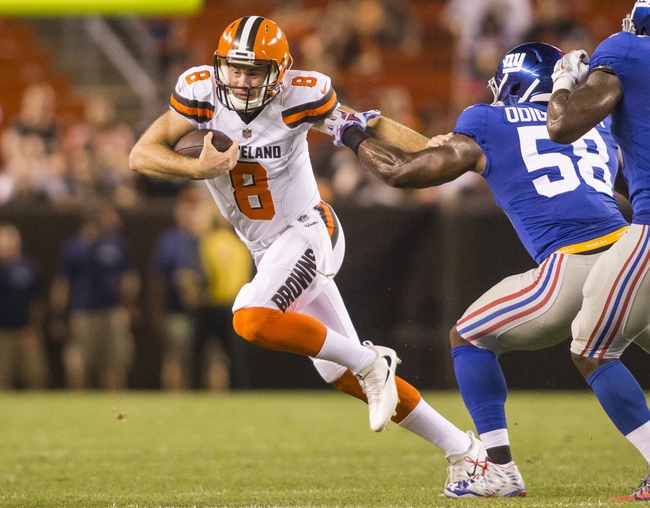 We have some Week 1 NFL preseason action on Thursday as the Cleveland Browns take on the New York Giants from MetLife Stadium.

The Cleveland Browns have been the laughing stock of the NFL for a couple of seasons now, winning just one game out of a possible 32 over the last two seasons after going a paltry 0-16 in 2017. The Browns ended up with the number one draft selection for the second year in a row, taking Oklahoma QB Baker Mayfield to be the team’s potential quarterback of the future. Mayfield will be expected to compete for the starting pivot job against former Bills QB Tyros Taylor, whom the Browns acquired for the 65th overall pick in this past draft. The Browns also had the 4th pick in the draft, taking corner Denzel Ward out of Ohio State and selected highly touted Georgia running back Nick Chubb in the 2nd round. Cleveland signed former 49ers running back Carlos Hyde, to pair with Chubb as a strong 1-2 combo out of the Browns backfield. Many expect the Browns to be better than years past, and to even finish higher than last in the AFC North, but only time will tell if all these years of heartbreak will come to fruition.

The New York Giants will be looking to bounce back after finishing the 2017-18 regular season with a 3-13 record, Big Blue’s fewest wins in a season since 1983 and the fewest wins in the league only ahead of the Cleveland Browns. New York’s futility earned them the 2nd pick in the draft, which the Giants used to select Saquon Barkley out of Penn State, who will be tasked immediately to improve a ground attack that finished 26th in the NFL in rushing last season. Pat Shurmur will be at the helm of the Giants this season as the Giants’ 17th head coach in franchise history, and will be coming into a situation that was tumultuous at best at the end of the season, with Eli Manning being benched for the first time in his career, and the speculation that New York would trade star receiver Odell Beckham Jr on offense, and teammates calling each other cancers to the team on the defensive side of the ball. The Giants’ have brought in pieces like Nate Solder from New England and drafting UTEP guard Will Hernandez to protect Manning to help further blossom the likes of Sterling Shepard who really emerged as a key cog in the Giants’ receiving corps last year. The level of optimism is at a high that we’ve only seen since the Giants won the Super Bowl in 2007 and 2011 and the hope is that a shift in attitude and culture will bring New York back to the playoffs for just the second time in the last seven years.

Preseason games, especially ones in the opening week like this one, in my opinion all comes down to has more depth. Both of these teams have some form of idea of who their starters will be in their season opener, but I think the Browns have a few more high-string jobs up for grabs. When playing time is on the line, guys tend to come out firing harder and while the Giants have the edge in certain positions, I just think Cleveland has some new found depth and could win this game outright, so I’ll take my free points with the Browns in this one.