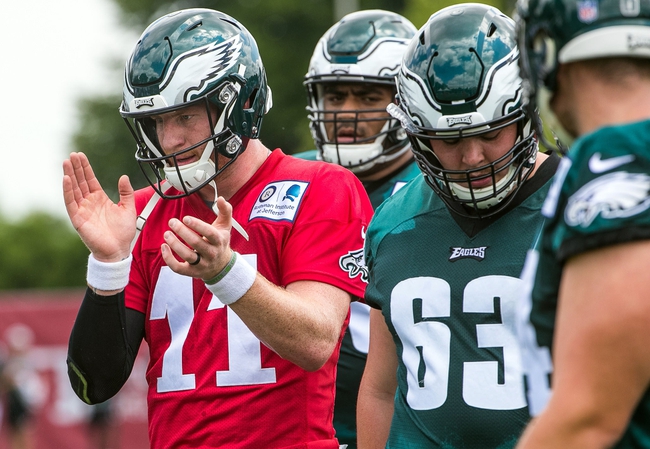 The Pittsburgh Steelers are one of those teams that pretty much knows what it has across the board, so you’re going to see the backups more than anything. That means Landry Jones, Mason Rudolph and Joshua Dobbs at the quarterback positions, and rookie James Washington instead of Antonio Brown. The Steelers have a ton of new backup offensive linemen, so they should be eager to give those guys plenty of reps as well. That includes rookie tackle Chuks Okorafor, who could have a shot at a starting job if he really turns heads. Defensively, working in rookie strong safety Terrell Edmunds will be key, as he’s a projected starter in the secondary. Linebacker Jonathan Bostic also has to get up to speed in this new defense since coming over from the Chicago Bears. It’s the little things with the Pittsburgh Steelers, a franchise that has its eyes on a Super Bowl an nothing else.

The Philadelphia Eagles should be focused on making sure there’s no Super Bowl hangover and coming to work as if they have everything to prove. Like the big game, don’t expect to see Carson Wentz in this contest, so you’ll get a combination of Nick Foles, Joe Callahan and Nate Sudfeld. The Eagles have a lot of the same faces offensively as a year ago, but there will be an interesting backup tight end battle between Dallas Goedert, Richard Rodgers and Joshua Perkins. Defensively, seeing Michael Bennett on an already stacked defensive line should be fun, and cornerback Avonte Maddox has to prove he’s worthy of keeping around given some struggles in camp. A lot like the Steelers, the Philadelphia Eagles don’t have a ton of question marks entering preseason. It’s about staying healthy, keeping Wentz in bubblewrap and waiting for September to arrive.

The Pittsburgh Steelers have better quarterback depth than the Eagles when you look at all three guys, and usually that's enough for me to pick them in a preseason game. However, you just know there's going to be a certain energy in the air given the Super Bowl victory. Sure, the banner isn't up yet and it's not ring night, but it is the first time you see these games in game action since the big victory, and you know few fanbases put on like Philadelphia. There's going to be more life in this preseason game than your typical meaningless game, and that could be enough to will the home team to victory. I'll lay the field goal with the Eagles.