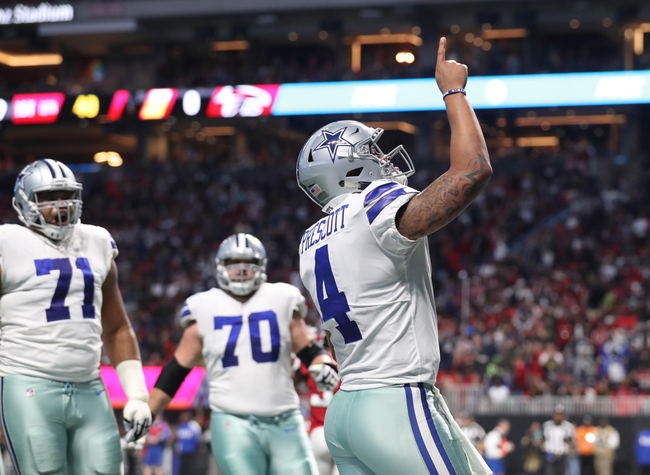 Out at Levi’s Stadium in Week 1 NFL preseason action, the Dallas Cowboys and the San Francisco 49ers will be meeting up on the gridiron on Thursday, August 9th.

Dallas had high hopes entering the 2017 season, but floundered to a 9-7 finish and a missed playoff berth. The Cowboys showed a little life in the first half of the year, sitting at 5-3 in Week 9, but consecutive losses to the Falcons, Eagles and Chargers—during which the Cowboys scored a combined 22 points—sealed their fate.

When the 2018 season begins, there will be a glaring hole at WR since Dez Bryant was released. Fan favorite TE Jason Witten won’t be there either, as he announced his retirement in May. That means QB Dak Prescott will have to find some new targets, and it’s likely new arrival Allen Hurns will be prominently featured in the targets mix.

As for the 49ers, they’re the trendy pick to have a breakout season in 2018. Following an 0-9 start, San Fran won six of their last seven games to finish at 6-10, which was an improvement over their prior two seasons.

The buzz around town heading into this year comes from new QB Jimmy Garoppolo, who won the final five games of the year for the 49ers. His backup at RB will be Jerick McKinnon, while wide receivers Marquise Goodwin and Pierre Garcon figure to have a heavy impact on the offense.

The general consensus seems to be that the Cowboys will falter this year facing the Super Bowl champion Eagles and the much-improved Giants within their own division. The 49ers have a lot of expectations to live up to, but as long as they can finish with a winning record it’ll be a positive season for them. I’m going to go with San Francisco here as Dallas feels out their new roster.