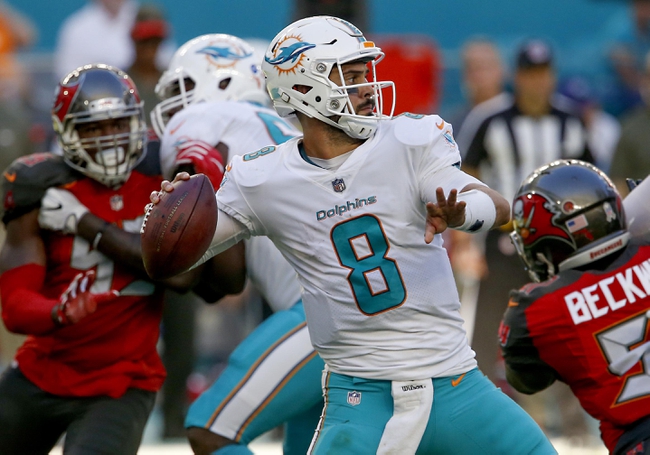 We have a battle of Florida in week 1 NFL preseason action as the Tampa Bay Buccaneers take on the Miami Dolphins from Hard Rock Stadium on Thursday.

The Tampa Bay Buccaneers will be looking to improve on a frustrating 2017 season that saw the Bucs finish 5-11 after making a lot of noise about making a move in the division and instead were the only team from the NFC South to miss the postseason. Jameis Winston returns for his 4th season as Tampa Bay’s starting QB after winning just 3 of 13 games that he started in 2017, but will ironically miss the first three games of this season after violating the league’s personal conduct policy. DeSean Jackson and Mike Evans return to lead Tampa’s receiving corps, while packing one of the best 1-2 tight end combos in the league with Cameron Brate and O.J. Howard who teamed up for 12 scores last year. With Doug “the Muscle Hamster” Martin not on the squad this season, his number 22 will be taken over by Ronald Jones Jr. who was selected in the second round by Tampa Bay out of USC. On defense, Gerald McCoy remains the mainstay in the Bucs’ D-Line, and acquiring former Giant Jason Pierre-Paul and drafting Washington D tackle Vita Via 12th overall is sure to help improve a Buccaneers defense that finished last in the NFL in sacks and total team defense. Only time will tell if head coach Dirk Koetter’s men can actually follow through on their word to return to the postseason for the first time since 2007 and maybe even win their first playoff game since winning the Super Bowl back in 2002.

The Miami Dolphins will be looking to improve on a frustrating 2017 of their own, finishing the year 6-10 with the bulk of it having some to do with Miami having to play 16 consecutive weeks without a bye after Hurricane Irma forced the Dolphins to take their bye week in week 1. Ryan Tannehill returns at the helm of the Dolphins’ offense, after missing the entire 2017 season with a knee injury. The Dolphins will be without top receiver Jarvis Landry who took his talents to Cleveland (wait… wrong sport.) but will hope to use the acquisitions of Albert Wilson and Danny Amendola along with the likes of returners Kenny Stills and DeVante Parker to bring the Miami offense to life. Kenyan Drake and Frank Gore will be tasked with leading the Dolphins’ backfield after the puzzling decision to trade lead back Jay Ajayi to the eventual Super Bowl champion Eagles last season. Defensively, the Dolphins need to replace Ndamukong Sun on the defensive line after releasing him in the offseason and while rely on Davon Godchaux and Jordan Phillips to put pressure on the opposing QB. Reshad Jones will be the key cog in the Dolphins’ secondary after leading all safeties with 122 tackles last season.

I feel like a broken record for anyone who follows my stuff, but I’ve said it before and I’ll say it again. Betting on preseason football is all about depth and who has more position battles going on in house. The problem here is that both sides have a ton of jostling for position, but I feel that the Buccaneers have a slight edge in the depth department. It also doesn’t hurt that the Bucs have had all of the success ATS when these two lock up so I’ll take the free points in a game Tampa Bay could win outright.