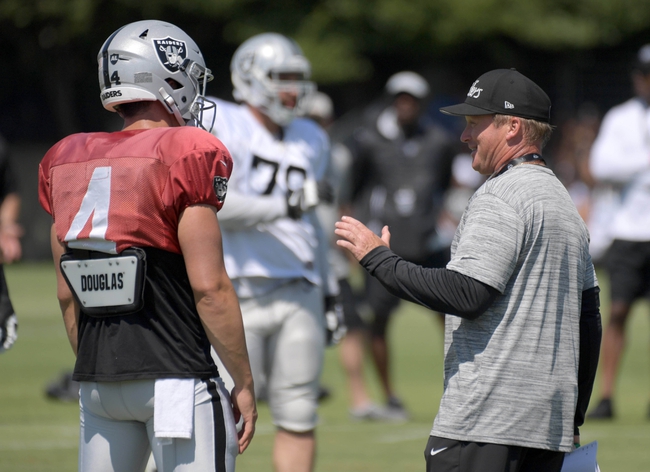 The Detroit Lions and Oakland Raiders meet Friday in NFL preseason action at the Oakland Coliseum.

The Detroit Lions begin a new era under head coach Matt Patricia and hope he’s the guy who can finally get this franchise over the hump. For preseason play, getting new running backs LeGarrette Blount and Kerryon Johnson comfortable in the offensive system will be key, while it’s important left guard Frank Ragnow proves he can lockdown his position as a first round draft pick. We shouldn’t see a ton of Matthew Stafford in this contest, which means Matt Cassel and Jake Rudock will take majority of the reps at quarterback. Defensively, there’s a ton of new backup linebackers who will be looking for playing time, including Christian Jones, Jonathan Freeny and Cam Johnson. Alabama defensive end Da'Shawn Hand should also dominate the second string defense. The Detroit Lions should have an interesting preseason with plenty of playing time on the table at key positions.

The Oakland Raiders also have a new head coach in Jon Gruden, and it’s going to be worth watching to see if he can adapt to this new age football. E.J. Manuel and Connor Cook will battle it out for the second string quarterback job, but the offense will be about finding the pecking order at wide receiver with Jordy Nelson, Martavis Bryant and Ryan Switzer joining the mix. First round pick Kolton Miller out of UCLA also has to prove he can handle the starting right tackle job. Defensively, the Raiders have all new starting linebackers in Tahir Whitehead, Derrick Johnson and Emmanuel Lamur, so finding chemistry between those guys is crucial. Rookie cornerback Nick Nelson also has the potential to turn some heads this preseason. The Oakland Raiders have the pieces to compete in the AFC West, but it comes down to if Gruden is capable of adjusting to a game that has completely changed the last time he was coach.

Few fan bases are as crazy as the Oakland Raiders, so you know Gruden and the rest of the guys will be eager to put on a good performance and set an early good impression, preseason or not. With media nowadays, even a poor showing in a meaningless game can set off bad vibes and have folks questioning if Gruden coming back was the smart move. The Raiders will want to win this game. The Detroit Lions have a very blah roster overall, and while I like betting on teams that have open comp in a lot of areas, I just don't think very highly of this roster. I'm going to lay the field goal with the home team.