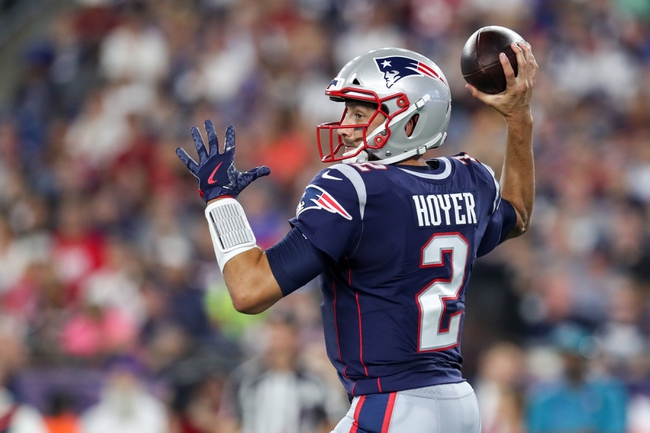 The Philadelphia Eagles lost their preseason opener at home to the Pittsburgh Steelers, 14-31. In the losing effort, Nate Sudfeld and Joe Callahan combined for 219 passing yards, two touchdowns and two interceptions. Corey Clement led the Eagles with 30 rushing yards on five attempts while Shelton Gibson and Dallas Goedert combined for 133 receiving yards and one touchdown on six receptions. Kamu Grugier-Hill led the Eagles with six tackles, LaRoy Reynolds had one sack and Rasul Douglas had one interception. The Eagles played well enough to compete for a victory, but preseason or not, it’s tough to win a football game when you turn the ball over three times. Regardless, getting Carson Wentz healthy at quarterback would be a victory this offseason for the Eagles. The Philadelphia Eagles have won six of their last nine preseason games.

The New England Patriots won their preseason opener at home against the Washington Redskins, 26-17. In the victory, Brian Hoyer and Danny Etling combined for 161 passing yards, zero touchdowns and zero interceptions. Jeremy Hill led the Patriots with 51 rushing yards and a touchdown on 11 attempts while Devin Lucien and Cordarrelle Patterson combined for 109 receiving yards on six receptions. Elandon Roberts led the Patriots with six tackles, Trent Harris had one sack and Ja'Whaun Bentley had two tackles for loss. For a team that was down 10 points after the first quarter, it was a solid showing for the Super Bowl runner ups. Of course, the Pats are one of those teams that don’t play starters much in the preseason, so team success don’t mean much to this team. The Patriots are simply trying to find those diamonds in the rough that will help them make another deep postseason run. The New England Patriots have lost four of their last six preseason games...

The New England Patriots are one of those teams that couldn't care less about preseason results, and even with that being the case, they still dug themselves out of an early double-digit lead and won by nine points. The Philadelphia Eagles were rocked in their preseason debut and don't provide much confidence with the turnover issue. Bottom line, preseason and meaningless game or not, you know the Pats coaching staff is petty, and they're going to want to stick it to the Eagles in this contest. It won't make up for losing the Super Bowl and it doesn't mean anything in the grand scheme of things, but Bill Belichick does have an ego and does like to stick it to certain teams when he gets the chance. I'll back the Pats in this contest.