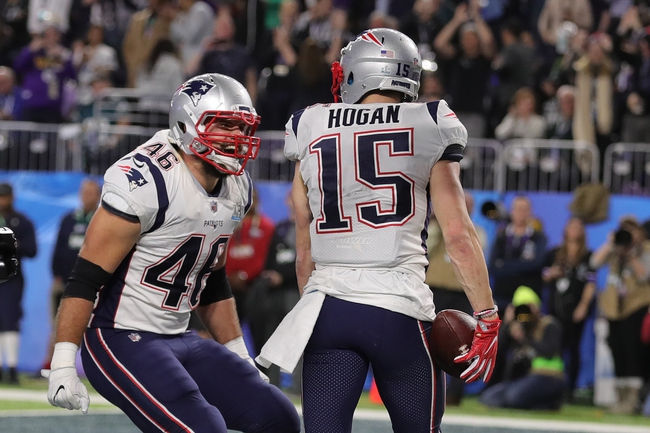 We have a Super Bowl rematch in week 2 NFL preseason action from Gillette Stadium on Thursday as the Philadelphia Eagles take on the New England Patriots.

The Philadelphia Eagles will look to turn things around after starting the preseason on a low note with a 31-14 loss to the Pittsburgh Steelers in their last outing. Nate Sudfeld led the Eagles with 140 yards and 2 touchdowns that were negated by 2 interceptions on 10 of 14 passing while Josh Adams and Corey Clement tied for the team lead with 30 rushing yards apiece in the loss, with Adams needing 6 carries for Clement’s 5. Shelton Gibson led Philly’s receivers with 77 yards and a touchdown with a pair of receptions while Dallas Goedert caught a team-high 4 passes for 66 yards and a score. The Eagles recorded 3 sacks as a team while Rasul Douglas recorded an interception and Kamu Grugier-Hill led the Eagles with 6 tackles.

The New England Patriots will be looking to keep their momentum going, rallying from a 17 point deficit to win their preseason opener by a final score of 26-17 in their last outing. Brian Hoyer threw for 144 yards on 16 of 23 passing while Jeremy Hill racked up a team-high 51 yards and a touchdown on 11 carries while Ralph Webb and Mike Gillislee took their team-high 14 carries apiece with Webb spinning his into 46 yards and a pair of touchdowns to Gillislee’s 43 rushing yards. Devin Lucien led New England with 4 catches for 71 yards as well in the winning effort. The Patriots’ D combined for 3 sacks with Elandon Roberts and Ja’Whaun Bentley leading the Pats with 5 tackles each.

I know it’s only preseason, but some of these Patriots want revenge from Philly’s Super Bowl win just a few months ago. Furthermore, I was disappointed with what I saw from the Eagles, while New England had an impressive comeback throughout the second half. Comebacks and momentum like that tends to stick around until at least the next game, no matter if it’s preseason or regular season. The Patriots are also a very strong team when playing at Gillette, so I’ll lay the points with New England here.