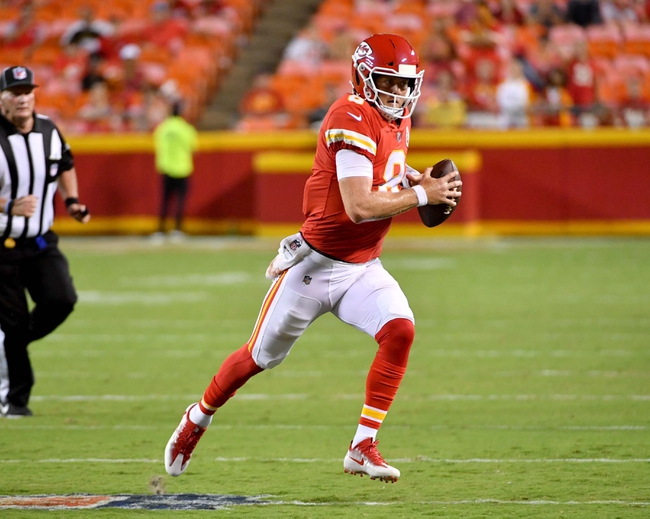 The Kansas City Chiefs and the Atlanta Falcons face off in week 2 NFL preseason action from Mercedes-Benz Stadium on Friday.

The Kansas City Chiefs will look to get back on track after losing their preseason opener against Houston by a final score of 17-10. Chad Henne saw the bulk of the work under center, going 8 for 14 passing with 91 yards and a touchdown that was cancelled out by an interception. Damien Williams led the Chiefs in rushing with 20 rushing yards while Kerwynn Williams and Darrel Williams each had a team-high 6 carries. Demarcus Robinson led the Chiefs receivers with 48 receiving yards and a touchdown while Alex Ellis caught a team high 4 passes in the losing effort. Defensively, Ben Niemann led the Chiefs with 4 tackles while the Chiefs defense as a whole held the Texans’ offense to 272 yards of total offense.

The Atlanta Falcons on the other hand also dropped their preseason opener, but were shut out by the New York Jets by a final score of 17-0. Kurt Benkert led the Falcons with 125 yards passing along with an interception on 9 of 17 passing while Matt Schaub threw for 54 yards on a perfect 9 for 9 passing. Malik Williams led the Falcons’ ground game with 6 carries for a team-high 19 yards while Devin Gray caught a team-high 4 passes for 83 yards and Justin Crawford added 4 receptions of his own. Jonathan Celestin recorded an interception while Demontae Kazee led Atlanta with 9 tackles as the Falcons allowed 253 yards of total offense in the loss.

Neither of these two got off to the start that they wanted to in their respective openers, but despite not getting the win I actually liked what the Chiefs put together on the field. The Falcons held their own against the Jets but just couldn’t get on the board and last time I checked, preseason or not, you need to score points to have a chance at winning games. I’ll take a shot with the Chiefs and the points in a game I see Kansas City winning outright.