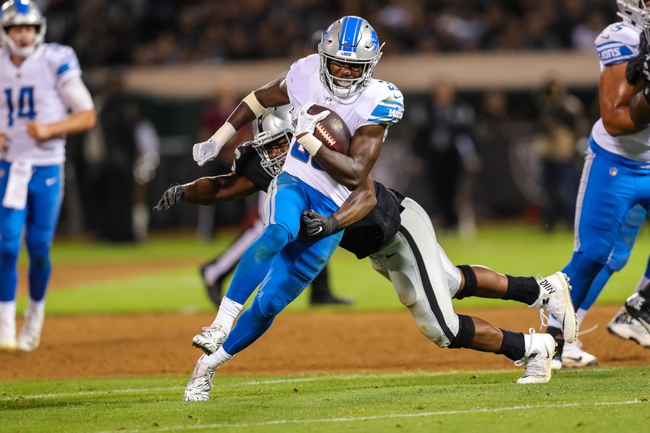 The New York Giants lost their preseason opener at home to the Cleveland Browns, 10-20. In the losing effort, Davis Webb and Alex Tanney combined for 119 passing yards, zero touchdowns and zero interceptions. Saquon Barkley led the Giants with 43 rushing yards on four attempts while Marquis Bundy and Wayne Gallman combined for 79 receiving yards on six receptions. Andrew Adams led the Giants with seven tackles, Robert Thomas had one sack and Jordan Williams had one tackle for loss. The Giants saw what they needed to see in their star rookie running back, and you would think the offense as a whole would have played better if it featured starters. The Giants defense gave up big plays here and there, but Big Blue has to be pleased with eight tackles for loss, all of which came from eight different players. The New York Giants have split their last eight preseason games.

The Detroit Lions lost their preseason opener on the road to the Oakland Raiders, 10-16. In the losing effort, Jake Rudock and Matt Cassel combined for 139 passing yards, zero touchdowns and zero interceptions. Kerryon Johnson led the Lions with 34 rushing yards on seven attempts while Brandon Powell and Johnson combined for 67 receiving yards on nine receptions. Rolan Milligan led the Lions with eight tackles, DeShawn Shead had six tackles and Chris Jones had one tackle for loss. The Lions won the time of possession battle, ran more plays and had their chances to win late, but the offense couldn’t execute when it mattered most. Still, the Lions may have found something in Auburn rookie running back Johnson, as he led the team in rushing while producing four receptions. Johnson and LeGarrette Blount could form a powerful 1-2 running back combination this season, taking serious pressure off of Matt Stafford. The Detroit Lions have lost three straight preseason games.

Neither of these teams looked good in their opening preseason game, as the offense for both sides struggled despite getting flashy plays from their running backs. With the backup quarterback situation for both sides being what it is, I'm not sure you can expect anything different in this contest. Points will be hard to come by in this game and you're probably better off having a free field goal in your pocket. I'm going to side with the Giants in this matchup.