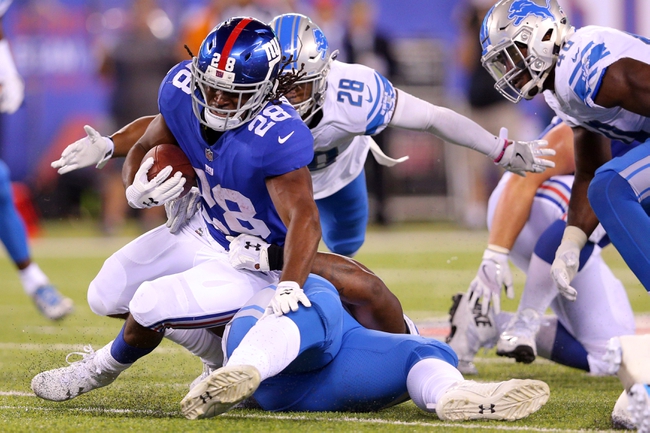 Up in the Motor City at Ford Field on Friday, we’ve got NFL preseason action coming as the New York Giants visit the Detroit Lions.

New York has plenty of room for improvement this year. The Giants went 3-13 in 2017, finishing dead last in the NFC East. We’ll see some fresh faces as New York tries to retool and remain competitive this season.

In their first preseason action this year, the Giants fell to the Browns 20-10. In that one, New York QB Eli Manning went 4-of-7 for 26 yards, and new RB Saquon Barkley had four carries for 43 yards.

As for the Lions, they managed to go 9-7 in 2017, which was good enough for second place in the NFC North, but not good enough for a playoff spot. There are things to build on here, as Detroit has posted consecutive winning seasons for the first time in over 20 years.

Detroit fell 16-10 to the Raiders in their first preseason action this year. Lions QBs Jake Rudock and Matt Cassel combined for 22 completions for 165 yards, while RB Ameer Abdullah posted 16 yards with a TD.

Detroit should be taking a step forward this season, as they’ve got some key players in place on both sides of the ball. That said, it’ll be tough to compete in that division with the Packers and Vikings looming. As for the Giants, they’re the trendy dark horse pick for the NFC East, and there’s little doubt they’ll post a better record this year. Still, I expect both teams to keep their best stuff on the sidelines for now so we won’t see too many fireworks here. I’m going Giants for the close cover, and the under as well.