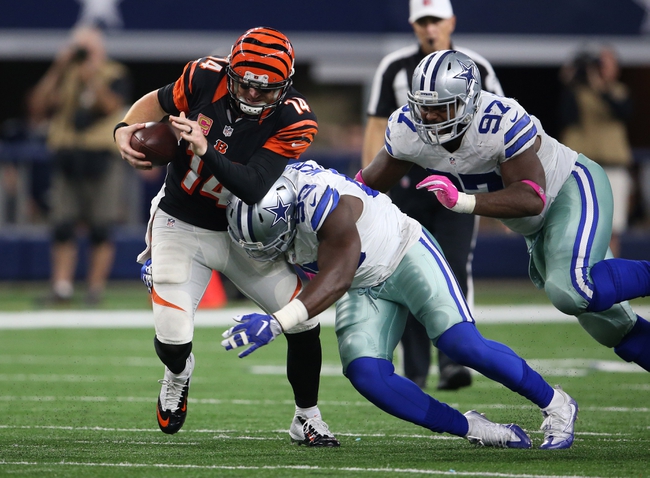 Headed our way Saturday evening from AT&T Stadium, the Cincinnati Bengals will be visiting the Dallas Cowboys in NFL activity.

Cincinnati is coming off something of a disappointing season, as the team finished just 7-9 and in third place in the AFC North. It was the first time the Bengals had put up back-to-back losing seasons in almost a decade.

In Cincinnati’s first preseason action this year, they took out Chicago 30-27 thanks to a 23-14 halftime edge. Andy Dalton had a nice game for the Bengals, as he went 6-of-8 for 103 yards, two touchdowns and a pick.

Over on the Cowboys’ side, they’re fresh off a 2017 that featured a 9-7 record and second place in the NFC East. It was a season full of what-ifs, as star RB Ezekiel Elliott had to serve a suspension beginning in Week 10.

The Cowboys had a lead on the 49ers in their first preseason game this year, going into the fourth quarter on top 21-10. Dallas allowed a pair of touchdowns in the final frame however, and fell 24-21. Starting QB Dak Prescott completed all three passes he attempted for 39 yards and a score.

Both of these teams have some major work to do in their respective divisions if they want to sniff the playoffs this year; Dallas has to contend with the champion Eagles and the upstart Giants, while Cincinnati always has the looming shadow of Pittsburgh to watch out for. Considering that, I don’t think we’ll get a berth from either one of these teams. Still, I like the Cowboys offense as they’ve got a few major contributors. The Bengals have some talent as well but much of it is on the backside of some veterans’ careers. All things considered, I’ll go Dallas here.