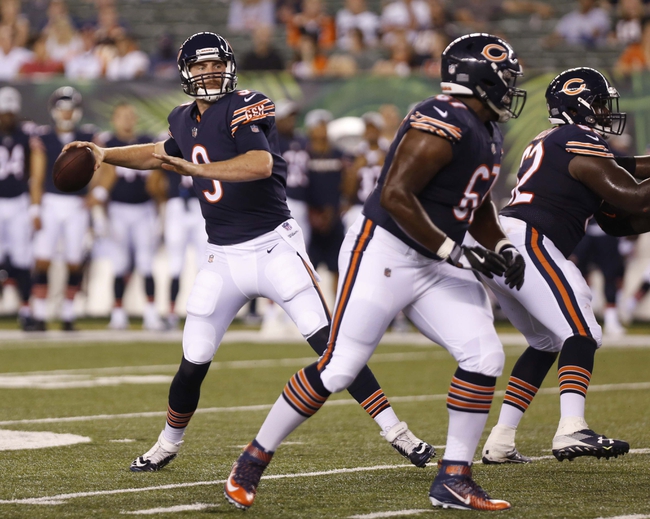 We have some NFL preseason action from Broncos Stadium at Mile High as the Chicago Bears take on the Denver Broncos.

The Chicago Bears will be looking for their first win of the preseason after falling to 0-2 with a 30-27 loss to Cincinnati in their last outing. Tyler Bray led the Bears with 219 passing yards and a pick on 18 of 27 passing while Chase Daniel threw for 76 yards and an interception on 8 of 12 passing. Mitch Trubisky threw for just 4 yards in limited action. Ryan Nall led Chicago with 9 carries for 95 yards while Taquan Mizzell turned his team-high 12 carries into 27 yards and a touchdown and DeMarcus Ayers added a touchdown of his own in the loss. Daniel Brown led the Bears with 90 receiving yards on 5 catches while Tanner Gentry hauled in a team-high 6 receptions. Kyle Fuller recorded a 47-yard pick-six while John Timu and Deiondre’ Hall shared the team lead with 6 tackles each.

The Denver Broncos will also be looking for their first win of the preseason after losing their opener by a final score of 42-28 last time out. Chad Kelly led the Broncos with 177 yards, 2 touchdowns and an interception on 14 of 21 passing while Paxton Lynch and Case Keenum combined to go 7 of 15 passing for 29 yards and an interception. Royce Freeman led the Broncos with 4 carries for 38 yards and a touchdown while Phillip Lindsay and Matt LaCosse each had 40 yards receiving and a touchdown, with Lindsay holding a 3-2 edge in receptions over LaCosse. Isaiah McKenzie added a 78-yard punt return TD while Zaire Anderson added an interception and Will Parks added a team-high 5 tackles and a sack in the loss.

This is one of the hardest preseason games of the week to try to gauge in my opinion, as both offenses have looked decent but the problem is the defense can’t keep points off of the board which is why I’m going to side with the over. Both sides have an offense that’s capable of scoring and getting 20 points from both sides shouldn’t be overly difficult so I’ll hope for some offensive fireworks in this one.