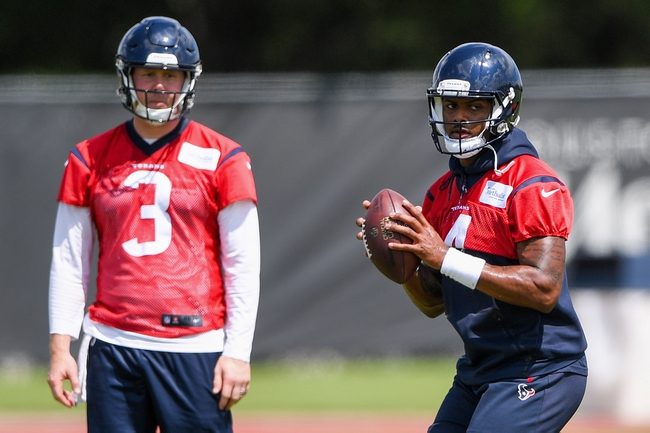 The San Francisco 49ers won their preseason opener at home against the Dallas Cowboys, 24-21. In the victory, C.J. Beathard and Nick Mullens combined for 322 passing yards, one touchdown and two interceptions. Raheem Mostert led the 49ers with 57 rushing yards on eight attempts while Victor Bolden Jr. and Dante Pettis combined for 107 receiving yards on four receptions. Elijah Lee led the 49ers with seven tackles, Jullian Taylor had one sack and Korey Toomer had two tackles for loss. The 49ers scored 17 second half points and got flawless play from their three quarterbacks if you’re able to overlook the two interceptions thrown. Offensively, the 49ers gashed the Cowboys with 454 yards and had 14 first downs through the air. While it was a meaningless opening preseason game and Jimmy Garoppolo is the clear starter, the 49ers were one of the more fun teams to watch last week. The San Francisco 49ers have won five of their last eight preseason games.

The Houston Texans won their preseason opener on the road against the Kansas City Chiefs, 17-10. In the victory, Brandon Weeden and Joe Webb combined for 153 passing yards, two touchdowns and zero interceptions. Webb led the Texans with 42 rushing yards on four attempts while Troymaine Pope and Braxton Miller combined for 75 receiving yards on six receptions. Kennan Gilchrist led the Texans with nine tackles, Angelo Blackson had one sack and Zach Cunningham had one interception. The Texans defense more than held its own despite allowing Kansas City to pick up first downs on 11 of its 16 third down attempts. The Texans didn’t allow a red zone touchdown and gave up just 3.2 yards per rush attempt. Hopefully at some point we get to see quarterback Deshaun Watson, as he threw just one pass in the opening exhibition game. If Watson is healthy and rust free, the Texans are a legit Super Bowl dark horse this upcoming season. The Houston Texans have won six of their last eight preseason games.

The San Francisco 49ers can't possibly repeat their offensive performance with their backups, especially on the road against one of the top, deeper defenses in the league. At home, you figure the Texans will give Watson more reps in this contest, as there's only one more preseason game after this when you consider starters to play the final week. The Texans can't expect Watson, who has just half a season under his belt, to be ready for the regular season when getting little preseason action. We should see a heavier dose of the star QB and Webb in this game. The Texans have three quarterbacks with starting experience, and Weeden and Webb both playerd well last week. I like the home team and the small chalk.