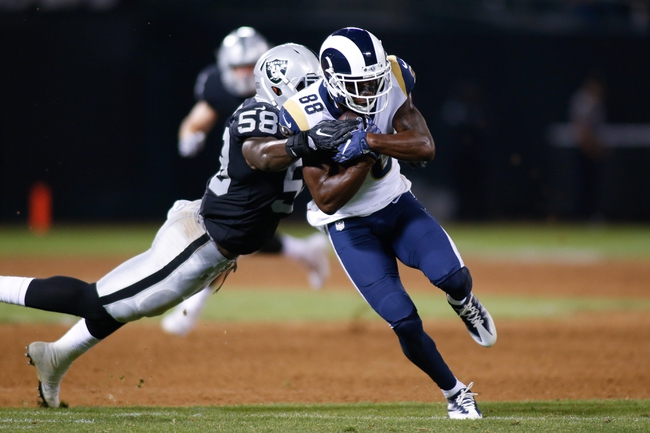 We’ve got a California showdown coming over at LA Memorial Coliseum on Saturday as the Oakland Raiders and the Los Angeles Rams match up in NFL Week 2 preseason activity.

Oakland is fresh off a 2017 in which they went 6-10 and finished third in the AFC West. We’ll be seeing a familiar face on the sidelines in new (well, new-old) head coach Jon Gruden.

In their first preseason matchup against the Lions, the Raiders managed a 16-10 victory. Oakland QB Connor Cook went 11-for-19 for 141 yards and a TD, while RB Chris Warren rushed for 86 yards on 13 carries.

Over on the Rams’ side, they’re coming off a 11-5 mark in 2017, finishing in first place in the NFC West. LA fell in the Wild Card Playoffs to the Falcons 26-13, which brought a sudden end to a promising season.

LA fell in their first preseason game this year, getting blown out 33-7 by the Ravens. In that one, Los Angeles QB Brandon Allen finished 10-of-15 for 73 yards and a TD. John Kelly led the rushers with 77 yards on 13 carries.

This is kind of a weird matchup—even for the preseason—since these teams will meet again in a few weeks for their regular season openers on “Monday Night Football.” As such, expect to see players on both sides that even the most dedicated fan will have trouble identifying, and plenty of vanilla plays and formations. This is probably not one to mess with, but I’m thinking the Raiders are a little further along with their deeper players and should eke one out here.