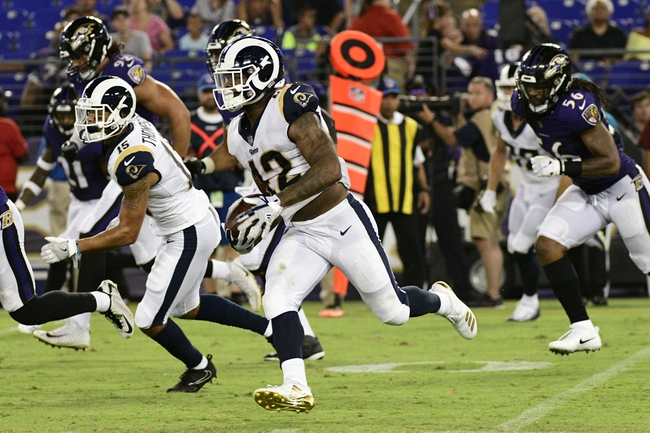 The Oakland Raiders won their preseason opener at home to the Detroit Lions, 16-10. In the victory, Connor Cook and EJ Manuel combined for 287 passing yards, one touchdown and zero interceptions. Chris Warren led the Raiders with 86 rushing yards on 13 attempts while Johnny Holton and Jalen Richard combined for 76 receiving yards on five receptions. Kyle Wilber led the Raiders with seven tackles, Shilique Calhoun had one sack and Frostee Rucker had one fumble recovery. The Raiders finally won a preseason game for the first time in years, and they did so with a defense that allowed just 227 total yards and forced 3-14 on third down. While that’s the positive with these Raiders, getting a contract done with star linebacker Khalil Mack is an even bigger issue. Word is the Raiders haven’t discussed a contract with Mack since February. The Oakland Raiders have lost seven of their last eight preseason games.

The Los Angeles Rams lost their preseason opener on the road to the Baltimore Ravens, 7-33. In the losing effort, Brandon Allen and Sean Mannion combined for 49 passing yards, one touchdown and one interception. John Kelly led the Rams with 77 rushing yards on 13 attempts while Fred Brown and KhaDarel Hodge combined for 29 receiving yards and one touchdown on four receptions. Micah Kiser led the Rams with six tackles, Bryce Hager had five tackles and Ethan Westbrooks had two sacks. The Rams were thumped in their opener, but it’s about what you expect from a team on the road that didn’t play their starters. Still, producing just 11 first downs and turning the ball over twice is about as ugly as it can get on the offensive side of the ball. The Los Angeles Rams have lost five of their last seven preseason games.

After sitting out the opener last week, the Los Angeles Rams are going to play their starters and give this team a much needed boost. The Raiders did what I expected with their new coach and the excitement in the building, but they had plenty of chances to blow it against a poor Detroit Lions squad. And let's not forget the Raiders have lost seven of their last eight preseason games. The Rams should be eager for a bounce back performance, especially at home in Los Angeles, where the expectations have gone through the roof with all the new pick ups. In a near pick em, give me the home team.