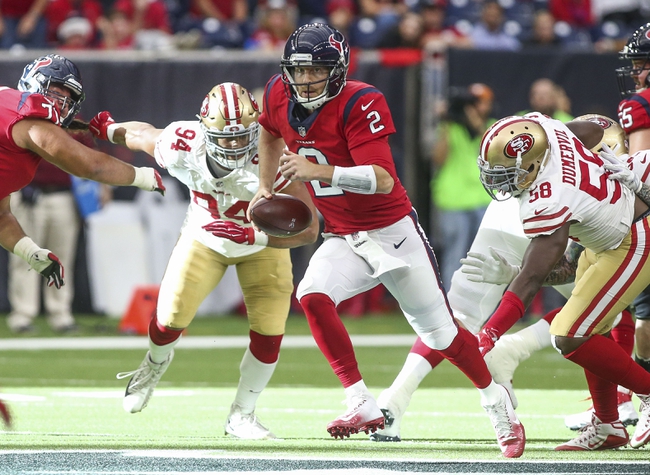 Out at NRG Stadium on Saturday, we’ve got NFL preseason action coming as the San Francisco 49ers visit the Houston Texans.

The Niners are coming off a 6-10 season, but the expectations are high for 2018 as QB Jimmy Garoppolo leads the offense. Garoppolo is credited with helping turn San Francisco’s season around as he led the team to five straight wins to finish off the year.

The 49ers’ preseason opener ended up as a 24-21 home victory over the Dallas Cowboys. In that game, Garoppolo went 3-for-6 for 34 yards but Nick Mullens did most of the damage on 11-of-13 for 141 yards, one TD and one pick. Raheem Mostert led the Niners’ rushing attack with 57 yards on eight carries.

Over on the Texans’ side, they finished at a disappointing 4-12 last season, in the basement of the AFC South. Hopes were high initially with Deshaun Watson at starting QB, but after an ACL tear in Week 9 Houston had to go with Tom Savage in the QB spot—and things didn’t go too well.

This year in their preseason debut, the Texans knocked out the Chiefs 17-10, while Watson saw some action with one pass for four yards. Brandon Weeden looked pretty good as the signal-caller; he finished with a 9-for-11 line, 97 yards and two touchdowns.

If you’re a fan of either one of these teams, you’ve got plenty of reasons to be optimistic about this season and beyond. The quarterbacks on both sides seem to be in place, and if the chips fall correctly Watson and Garoppolo have got “franchise” written all over them. Still, I’d imagine the Texans will continue to treat Watson with kid gloves and he won’t see much action here. I’m going to go Niners.