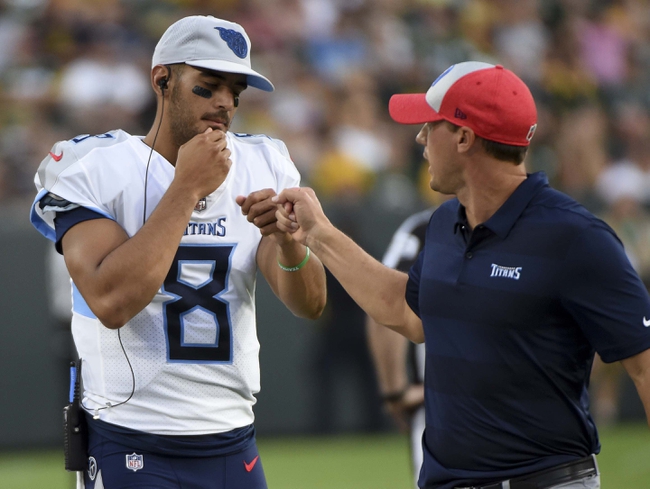 The Tampa Bay Buccaneers won their preseason opener on the road against the Miami Dolphins, 26-24. In the victory, Ryan Griffin and Jameis Winston combined for 281 passing yards, one touchdown and zero interceptions. Peyton Barber led the Buccaneers with 21 rushing yards and one touchdown on four attempts while Sergio Bailey and Cameron Brate combined for 100 receiving yards on nine receptions. Ryan Smith led the Buccaneers with seven tackles, Gerald McCoy had one sack and Isaiah Johnson had one fumble recovery. The Buccaneers moved the chains 27 times, had 399 total yards and the defense created two turnovers. It was an overall balanced performance from the Bucs, as they scored in every quarter and had three quarterbacks throw for at least 55 yards. The Buccaneers have to like what they’re at right now one week into meaningless play. The Tampa Bay Buccaneers have split their last four preseason games.

The Tennessee Titans lost their preseason opener on the road to the Green Bay Packers, 17-31. In the losing effort, Luke Falk and Blaine Gabbert combined for 181 passing yards, one touchdown and zero interceptions. Akrum Wadley led the Titans with 27 rushing yards on nine attempts while Nick Williams and Devin Ross combined for 69 receiving yards on three receptions. Robert Spillane led the Titans with eight tackles, Sharif Finch had one sack and Julius Warmsley had one tackles for loss. The Titans backup defense got crushed, as they allowed 445 yards for the game and gave up 24 points in the second half. Of course, being on the field for 11 more minutes didn’t help, but few teams were worse than the Titans on the defensive side. The good news is Marcus Mariota looked extremely quick and confident out there, as he looks for this to be his breakout season. The Tennessee Titans have lost four of their last five preseason games.

I never put too much stock into one game, especially in preseason play, but you couldn't have watched both of these teams play last week and then lay points with the Titans. The Buccaneers fly to the football defensively and have some good backups, and they seem to be giving Winston quite a workload despite being suspended for a chunk of the regular season. Mariota is going to continue being spoon fed minutes, and I'm not excited to lay chalk with most of the reps going to Falk and Gabbert. I'll take a stab with the points here.