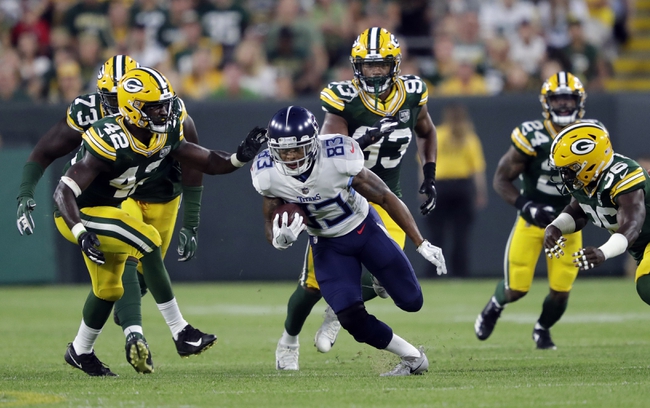 We have some week 2 NFL preseason action on Saturday as the Tampa Bay Buccaneers take on the Tennessee Titans from Nissan Stadium in Nashville.

The Tampa Bay Buccaneers will be looking to build on a strong start to their preseason, winning their opener by a final score of 26-24 over Miami in their last outing. Ryan Griffin led the Bucs with 179 yards and a touchdown on 20 of 26 passing, while Jameis Winston threw for 102 yards on 11 of 13 passing. Peyton Barber led Tampa with 21 yards and a touchdown on 4 carries, while Dare Ogunbowale added a team-high 7 carries and Ronald Jones II added a touchdown on the ground as well. Sergio Bailey II led the Buccaneers with 52 receiving yards on 4 catches while Cameron Brate hauled in a team-high 5 balls and Alan Cross added a touchdown grab as well in the win. Gerald McCoy recorded a sack while Ryan Smith recorded an interception and a team-high 5 tackles.

The Tennessee Titans will be looking to bounce back after suffering a 31-17 loss to Green Bay in their preseason opener last time out. Luke Falk led the Titans with 105 yards and a touchdown on 10 of 19 passing while Marcus Mariota completed 2 of 3 passes for 42 yards and a touchdown. Akrum Wadley led the Titans with 9 carries for 27 yards on the ground while Nick Williams lone catch went for a team-leading 38 yards. Deontay Burnett caught a team-high 3 passes while Tim Semisch and Darius Jennings each hauled in a touchdown grab. Jayon Brown hauled in an interception while Robert Spillane led Tennessee with 5 tackles in addition to being one of three Titans with a sack in the win.

Tampa Bay looked much better than Tennessee in their respective preseason openers, but I just have this feeling that Tennessee bounces back here. The Buccaneers narrowly got away with one as they let Miami hang around for the majority of the game, while Tennessee just had a couple of bad bounces go Green Bay’s way. I like Tennessee to bounce back considering they’ve had Tampa Bay’s number in this matchup so I’ll lay the points with Tennessee here.