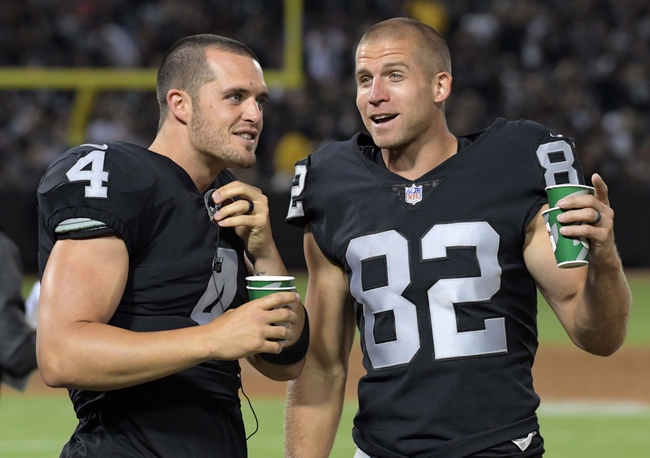 The Green Bay Packers look to stay undefeated in the preseason as they head into the Black Hole for a match up against the Oakland Raiders.

The Packers will see a familiar face in Oakland on Friday night as they will take on long time Green Bay receiver Jordy Nelson for the first time since his offseason move to the Bay Area and while it won’t have the same context as a regular season matchup it will surely carry some weight for both sides. The Packers have had some trying times this preseason ranging from Aaron Rodgers ripping his receiving group to trade rumors surrounding Randall Cobb but they have put it all aside on the field through two exhibition games and have had some great performances from some of their younger players. The Packers and Raiders both have said they won’t have their starters in any longer than the first half but with the line jumping up to six-points for the Raiders it looks like Green Bay’s may not get much time at all, and we are almost certain that Rodgers will be on the sidelines from whistle to whistle.

The Raiders meanwhile are coming off a tough loss in their last preseason contest but return home looking for another confidence booster heading into the regular season in two week’s time. However, a victory at home against a very undermanned Packers side may not be the shot in the arm the team needs as they still have a ton of uncertainty on their roster, namely the absence of Khalil Mack on defense, and they can ill afford to lose anyone else at this juncture. Oakland’s offense has been a bit stagnant and their defense has actually impressed thus far, but expect both to even out a bit in this one as the Silver and Black should have Derek Carr in until halftime.

The Packers are 4-0 ATS in their last four meetings against the Raiders and have hit the over in four of their last five on grass while the Raiders are 3-9-2 ATS in their last 14 overall and have hit the over in five straight against Green Bay. This one should feature a bit more from the Oakland starters and while the line shift has overcorrected to the Rodgers news I am not confident in Oakland to cover. Therefore, I like the over as both teams will look to up the complexity offensively and should be able to pick apart their opponents.