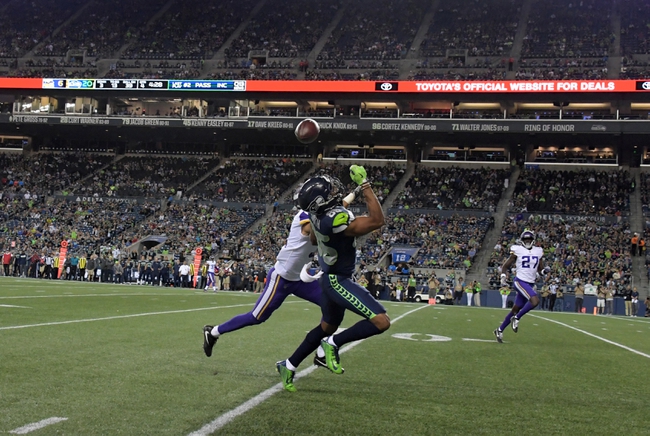 We have some week 3 NFL preseason action from U.S. Bank Stadium on Friday as the Seattle Seahawks take on the Minnesota Vikings.

The Seattle Seahawks will still be looking for their first win of the preseason after dropping back-to-back games with a 24-14 loss to the Los Angeles Chargers in their last outing. Russell Wilson led the Seahawks in passing with 193 yards on 13 of 21 passing, while Alex McGough threw for 97 yards and a touchdown on 9 of 12 through the air. Chris Carson saw the bulk of the workload in the Seattle backfield with 9 carries for 34 yards, while Jaron Brown led the Seahawks with 74 receiving yards on a pair of catches. David Moore came right behind with 71 yards and C.J. Prosise added a team-high 6 grabs while Malik Turner added a touchdown grab in the loss. Rasheem Green led Seattle with 1.5 sacks while Austin Calitro recorded a team-high 4 tackles.

The Minnesota Vikings will be looking to bounce back from a defensive minded 14-10 loss to Jacksonville in their last outing, in a battle of the top two defenses from the NFL last season. Kyle Sloter threw for 82 yards on 10 of 15 passing, while Mike Boone recorded 13 rushes for 91 yards and a touchdown. Cayleb Jones led the Vikes with 23 receiving yards while Jake Wieneke led Minnesota with 3 catches. Harrison Smith recorded an interception, but the game ball had to go to Ifeadi Odenigbo who had a team-high 5 tackles and a pair of sacks in the loss.

Both of these teams were disappointing in their last outing, but despite their winless record, I think Seattle has shown more potential to get the win in this one. Russell Wilson was pretty good in extended action while the Vikings are still trying to get their backup QB situation sorted. All in all, the Seahawks have done a good job covering on the road and I think they can do enough to get the cover in a game I see Seattle winning outright for their first W of the preseason.