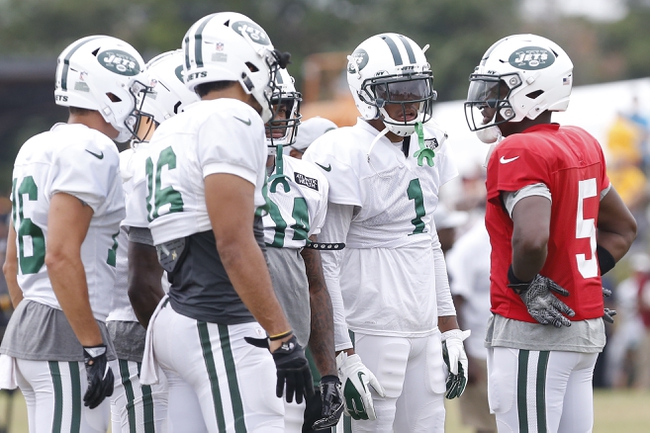 The New York Giants are now 1-1 in preseason action after beating the Detroit Lions, 30-17. In the victory, Davis Webb and Alex Tanney combined for 176 passing yards, one touchdown and zero interceptions. Robert Martin led the Giants with 47 rushing yards and one touchdown on seven attempts while Russell Shepard and Roger Lewis combined for 71 receiving yards on two receptions. Mark Herzlich led the Giants with seven tackles, Kerry Wynn had one sack and Leonard Johnson had one tackle for loss. Rookie running back Saquon Barkley says his hamstring is feeling fine, but he’s likely going to be held out until the regular season opener. The Giants didn’t play Eli Manning in the last game, and he has just seven pass attempts overall, so it will be interesting to see how he’s managed for this contest. The New York Giants have split their last six preseason games.

The New York Jets are now 1-1 in preseason action after losing to the Washington Redkins, 13-15. In the losing effort, Teddy Bridgewater and Sam Darnold combined for 170 passing yards, one touchdown and two interceptions. George Atkinson III led the Jets with 31 rushing yards on seven attempts while Atkinson and Charone Peake combined for 59 receiving yards and one touchdown on three receptions. Terrence Brooks led the Jets with eight tackles, Jordan Jenkins had one sack and Josh Martin had one tackle for loss. The Jets defense is allowing an average of 7.5 points in two preseason games and has produced a combined 12 tackles for loss. There also seems to be an intriguing quarterback battle between Bridgewater and Darnold, which could give the team a new starter and possibly open up the trade market as well. The New York Jets have split their last six preseason games.

The New York Giants seem to be resting Eli for the regular season and aren't going to risk anymore injuries to key players, so while the third game is usually where you see the starters, the Giants may take a different approach based on what we've seen so far. The New York Jets have a true QB battle going on and both guys have played at a high level for the most part. Those are teams you want to get behind in preseason action, as they're usually the most successful. Darnold is playing for possibly a starting position and Bridgewater is hoping to play well enough to get a team to bite on a trade. The rumors have been heating up over the last few days. I like the Jets and the small chalk, as the QB depth will prevail.