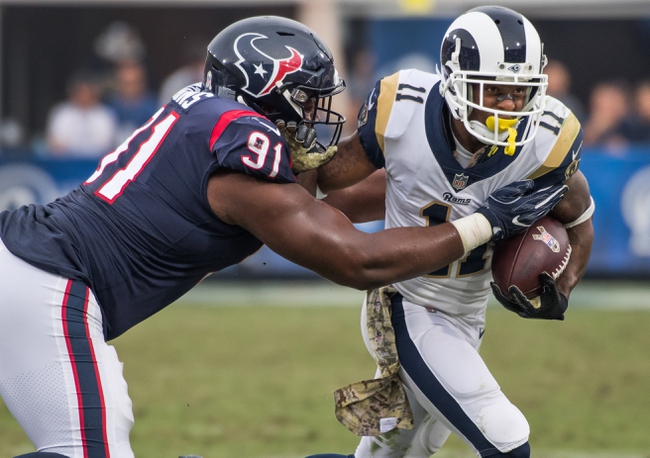 We have some week 3 NFL preseason action on Saturday as the Houston Texans pay a visit to the Los Angeles Rams.

The Houston Texans will look to stay perfect in preseason play after improving to 2-0 with a 16-13 win over San Francisco in their last outing. Joe Webb III led Houston with 127 yards and a touchdown on 10 of 19 passing while DeShaun Watson threw for 73 yards and a TD on 5 of 8 passing. Webb III also led Houston with 22 rushing yards while Alfred Blue saw the most touches in the Texans’ backfield with 7 carries. Bruce Ellington led Houston’s receiving corps with 4 catches for 50 yards and a touchdown while Vyncint Smith added a touchdown grab of his own. Johnson Bademosi and Davin Bellamy each recorded a pick for the Texans’ D while Josh Keyes and Kennan Gilchrist tied for the team high with 4 tackles each.

The Los Angeles Rams will look to build on their first win of the preseason with a 19-15 victory over Oakland in their last outing. Sean Mannion and Brandon Allen combined to throw for 152 yards and a touchdown on 16 of 27 passing, while John Kelly led the Rams in rushing with 18 carries for 56 yards and a touchdown. KhaDarel Hodge led the Rams in receiving with a pair of catches for 57 yards while Henry Krieger-Coble’s lone catch went for 35 yards. The Rams defence combined for a total of 4 sacks while Bryce Hager led the team in tackling with 4 tackles in the winning effort.

I like what Houston’s done so far in the preseason, but I also like what I saw from the Rams when they finally got to play a game at home. The Coliseum tends to bring out the best in the Rams dating back to last season, and since the Texans have struggled ATS in this matchup, I like the Rams to cover and hand the Texans their first loss of the preseason.