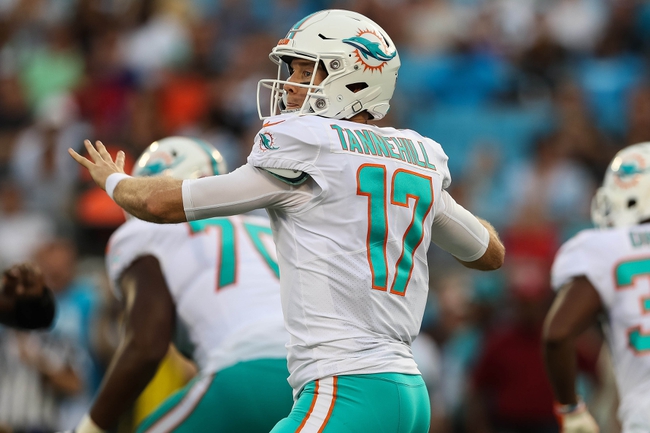 The Baltimore Ravens are now 3-0 in preseason action after beating the Indianapolis Colts, 20-19. In the victory, Joe Flacco and Lamar Jackson combined for 121 passing yards, two touchdowns and zero interceptions. Gus Edwards led the Ravens with 43 rushing yards on 15 attempts while Michael Crabtree and Kenneth Dixon combined for 53 receiving yards on four receptions. Kenny Young led the Ravens with eight tackles, Tim Williams had one sack and Tyus Bowser had two tackles for loss. The Ravens remain the best preseason team in the business the last couple of years and won their recent contest on a defense that allowed just 15 first downs and forced three turnovers. Flacco was sharp in limited reps and despite not being accurate at times, Jackson takes care of the ball and always makes that one play that has you thinking he could legit be a starting quarterback in this league. The Baltimore Ravens have won 11 straight preseason games.

The Miami Dolphins are now 0-2 in preseason action after losing to the Carolina Panthers, 20-27. In the losing effort, Ryan Tannehill and Brock Osweiler combined for 168 passing yards, zero touchdowns and zero interceptions. Kenyan Drake led the Dolphins with 54 rushing yards on eight attempts while Jakeem Grant and Albert Wilson combined for 84 receiving yards on nine receptions. Maurice Smith led the Dolphins with eight tackles, Robert Quinn had two sacks and Xavien Howard had one interception. The Dolphins defense has given up a combined 53 points and has had a tough time stopping the chunk yardage plays that open up drives. Miami has to be better defensively with its starting unit to provide confidence heading into the season opener against the Tennessee Titans. The good news for the Dolphins is that Tannehill has looked solid in limited playing time, and that’s the No. 1 key for this team if this is going to be a surprise year. The Miami Dolphins have lost four of their last five preseason games.

Betting preseason is basically coin flips and it's tough to find any consistency. The Miami Dolphins probably win this game at home if their starters play a good portion of the game, but I'm not sure how anybody bets against the Ravens given their preseason successs. The Baltimore Ravens have won 11 straight preseason games. The last loss came in 2015. That's incredible when you consider the constant players rotating in and out. So, based on that trend, I'll ride the Ravens once more.