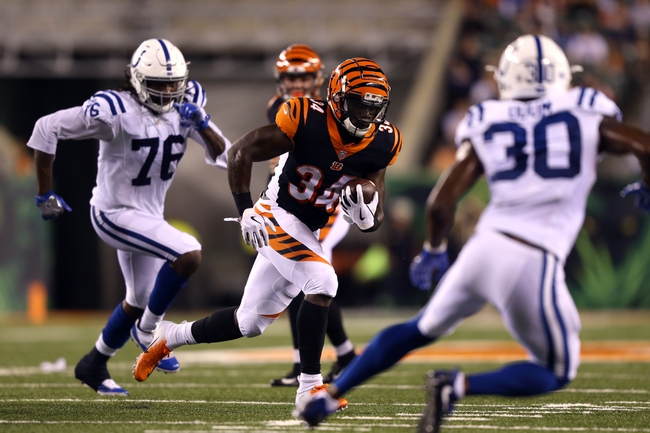 We have some opening week NFL action from Lucas Oil Stadium as the Cincinnati Bengals visit the Indianapolis Colts on Sunday afternoon.

The Cincinnati Bengals come into the 2018 season looking to improve on a frustrating season that saw Cincy finish 3rd in the AFC North with a 7-9 record, securing their first back-to-back losing seasons since 2007-2008. Andy Dalton is back under centre for the Bengals after throwing for 3,320 yards, 25 touchdowns and 12 interceptions on just under 60% completion last season. Joe Mixon will be tasked to improve on his team-leading 626 rushing yards and 4 touchdowns in his first season as the top running back in Cincinnati, while pro bowl receiver A.J. Green is back to lead Cincinnati’s receiving corps after tallying 1,078 yards and 8 touchdowns with 75 receptions last season. The Bengals retain a good chunk of last year’s hard-hitting 4-3 defense, with the likes of Carlos Dunlap and Geno Atkins up front, Vontaze Burfict in the linebacking corps and Dre Kirkpatrick and George Iloka in the secondary to help improve on a Bengals squad that was top-10 against the pass, but 3rd-worst in the NFL against the run last season.

The Indianapolis Colts will be looking to improve after a frustrating 2017 campaign that saw the Colts finish 4-12, which led to the Colts firing then head coach Chuck Pagano after six up and down seasons at the helm of the Colts’ coaching staff, leading to the hiring of Frank Reich for his first NFL head coaching gig. Andrew Luck appears to finally be healthy enough to resume his duties as the Colts’ starting QB after missing the entire 2017 season following shoulder surgery, but will hope to have some better protection from a Colts’ offensive line that allowed a league-worst 56 sacks last season. Marlon Mack will be expected to lead the Colts’ ground attack after the departure of Frank Gore after showing some signs of life in his rookie campaign with 358 rushing yards on 93 carries last season. T.Y. Hilton returns to lead the Colts’ receiving corps, with 57 receptions and 16.9 yards per reception, the highest average since his rookie year in 2012. On defense, Darius Leonard is expected to anchor the Colts’ linebackers in his rookie season, hile Jabaal Sheard will bump from linebacker to the defensive end. In the secondary, the Colts will be hoping for a solid sophomore campaign from Malik Hooker who had his rookie year cut short thanks to a knee injury, all of which was part of the reason that Indy finished with the 3rd-worst total defense in the NFL last season, a culture in which I’m sure Reich is looking to change.

I’m sure Indianapolis is going to be a better team as long as Luck stays healthy and with an improved defensive mind in Reich leading the Colts. However, I need to see that the Colts have everything working for them before I can trust the Colts going forward. The Bengals still have a stout defense and bring back some key parts of their own and have some weapons on the offensive side of the ball, so I’ll take the free points with Cincinnati as I just don’t trust Indianapolis right out of the gate.