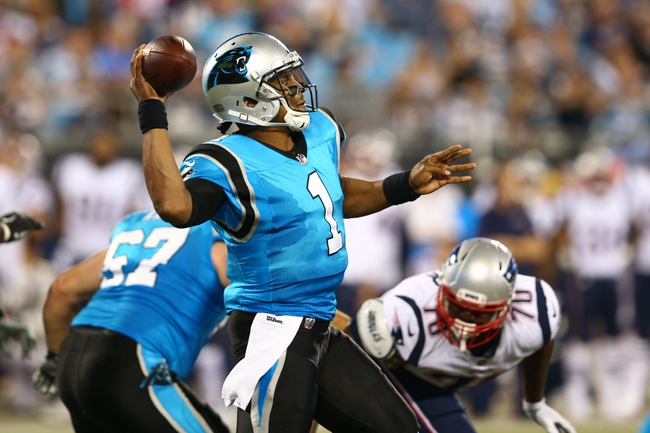 The Dallas Cowboys and the Carolina Panthers meet in week 1 NFL action from Bank of America Stadium on Sunday afternoon.

The Dallas Cowboys will look to forget about a tumultuous 2017 campaign that saw the Cowboys finish 9-7 and on the outside looking in at the playoffs after a season that was mired in controversy after the legal battle involving running back Ezekiel Elliott and his six game suspension. Dak Prescott is back for his 3rd season in charge of the Cowboys’ offense, throwing for 3,324 yards, 22 touchdowns and 13 interceptions on 62.9% passing last season. Despite serving the six game suspension, Elliott still led the Cowboys with 983 rushing yards and 7 touchdowns. The Cowboys cut ties with leading receiver Dez Bryant after logging 69 catches for 838 yards and 6 touchdowns. Allen Hurns steps in as the new top receiver in the Cowboys offense after starting just 8 games for the Jaguars last season with 39 catches for 484 yards and 2 touchdowns. Defensively, the Cowboys lost Orlando Scandrick to Kansas City, but bolstered their linebacking corps by selecting Boise State’s Leighton Vander Esch to go along side Sean Lee in the middle of the Cowboys’ D, a defense that finished 8th in the league in total and rush defense last season.

The Carolina Panthers will be looking to build on a solid 11-5 record in the 2017 regular season, that saw the Panthers clinch a wild card spot, leading to a 31-26 loss to New Orleans in the opening round of the playoffs. Cam Newton is back at the helm of the Panthers’ offense, after throwing for over 3,300 yards, 22 touchdowns and 16 interceptions last season, while also leading the Panthers on the ground with 754 yards and 6 touchdowns last season. Christian McCaffrey takes over the top running back slot after Jonathan Stewart departed in the offseason, while Devin Funchess and Torrey Smith will be tasked to lead Carolina’s receiving corps after Funchess led the Panthers with 840 receiving yards last season. Defensively, Luke Kuechly is back to anchor the Panthers in the middle, with Julius Peppers up front and Shaq Thompson alongside Kuechly to help the Panthers maintain a top-10 defence that finished 3rd in the NFL against the run last season, allowing 88.1 yards per game.

I’m not sure what to make of the Cowboys as they let go their top receiver in Bryant and Turns isn’t really a step up from that. We saw last season how reliant the Cowboys are on Ezekiel Elliott, being outscored 92-22 in their first three games that Ezekiel served of his suspension. Even with Zeke back, the Panthers were strong against the run last season and I don’t see that changing here. The Panthers’ offense has had some turnover, but I like Newton to do enough to lead the Panthers to a win over the Cowboys and to cover the spread as well so I’ll lay the points with Carolina here.