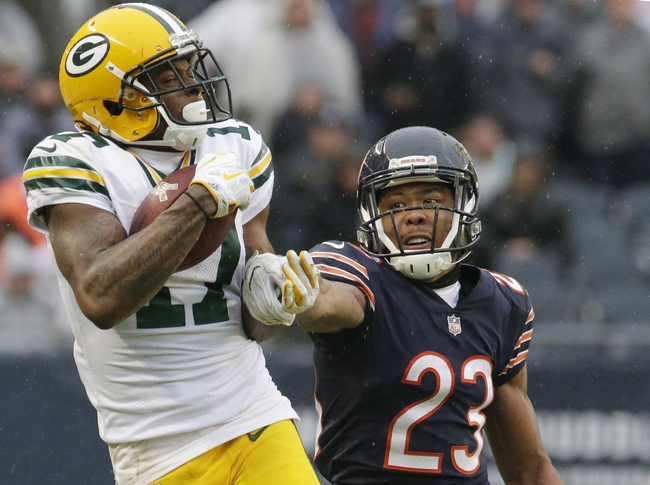 We have close out the first Sunday of the 2018 NFL regular season by re-igniting a rivalry on Sunday Night Football when the Chicago Bears head to Lambeau Field to take on the Green Bay Packers.

The Chicago Bears will be looking to bounce back after finishing in the basement of the NFC North for the 4th straight season, finishing 5-11 and missing out on the playoffs for the seventh straight season. Mitch Trubisky will have the reins all to himself for the Chicago offense after throwing for just under 2,200 yards, 7 touchdowns and 7 picks on 59.4% passing last season. Jordan Howard is back to lead the Bears’ ground attack after rushing for 1,122 yards and 9 TDs last season but will have to rely on Taylor Gabriel and Allen Robinson II after losing top receiver Kendall Wright to the Minnesota Vikings. On defense, Akiem Hicks, Kyle Fuller and Prince Amukamara will be some of the key pieces tasked with helping the Bears maintain a top-10 defense in terms of total yardage and against the pass while finishing just outside the top-10 against the rush last season.

The Green Bay Packers will be looking to rebound as well after going through their first losing season since 2008, finishing with a 7-9 record. The Pack looked promising after starting 4-1, but a collarbone injury to starting QB Aaron Rodgers derailed Green Bay’s season and sent the Packers on a downward spiral out of the playoffs. As mentioned, Aaron Rodgers is back under center after throwing for 1,836 yards, 9 touchdowns and 12 interceptions in an abbreviated season while Jamaal Williams is back to lead Green Bay on the ground after racking up a team-high 556 rushing yards and 4 touchdowns last season. Davante Adams and Randall Cobb are back as one of the more dynamic 1-2 receiving punches in the NFL after combining for 140 catches, 1,538 yards and 14 touchdowns last season. Things can only get better for Green Bay’s receiving corps with the addition of former pro bowl tight end Jimmy Graham, who caught 57 passes for 520 yards and 10 TDs for Seattle last season. On defense, it’s the usual suspects like Clay Matthews, Ha Ha Clinton-Dix, Nick Perry and Tramon Williams who will have to help improve an unusually disappointing Packer defense that finished in the bottom half of the league in most team categories but did finish top-5 in the league with 51 sacks as a team last season.

Green Bay has won 16 of the last 19 meetings between these two teams and if we take out the last meeting where Rodgers was injured, the Pack have actually won 10 of the last 11 meetings by at least eight points, which is what the line is at at the time of posting this pick. The Packers simply have an edge in pretty much every department offensively, and the defense can’t be as bad as it was last season. I need Chicago to prove me wrong before I can install any faith in the Bears, so I’ll lay the points with the Packers on Sunday night.