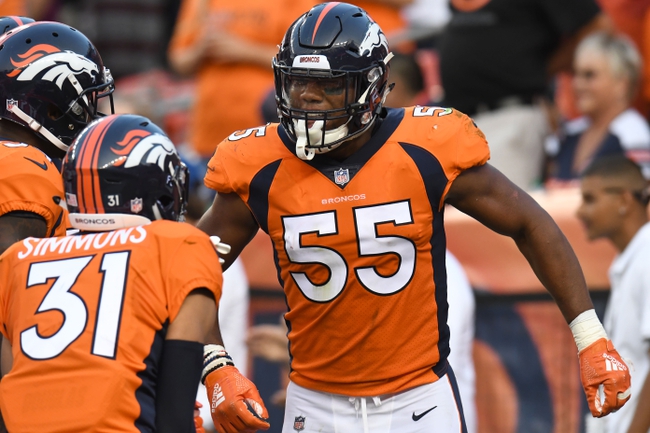 The Seattle Seahawks hope to rebound from a nine-win season and avoid missing the playoffs back-to-back years for the first time since 2008-09. The Seattle Seahawks have split their last six regular season openers. The Seahawks bread and butter over the years was the defense, aka LOB, but this unit looks a lot different without Richard Sherman, Earl Thomas and K.J. Wright, who will miss this week due to injury. The new look defense is the main reason many are down on these Seahawks and believe the constant Super Bowl runs are finished. The one positive for the Seahawks is that Russell Wilson is still one of the best quarterbacks in the game and capable of making something out of nothing. Right when you think the Seahawks are done, Wilson manages to raise his game and gives the team a chance to win. Wilson must do a lot more of taking his game to another level this season. The Seattle Seahawks have won five of their last six regular season road games.

The Denver Broncos haven’t made the playoffs since winning the Super Bowl in 2015 and are coming off their lowest win total since 2010. The Denver Broncos have won each of their last six regular season openers. The Broncos still have one of the most talented defenses in the league that’s capable of keeping them in every game, and it got even better with the addition of rookie linebacker Bradley Chubb. There’s little questions on that side of the ball for the Broncos. The issue is quarterback play, and it’s going to come down to if Case Keenum can bring some of that magic from Minnesota and be the difference maker in Denver. If Keenum can make accurate throws and not turn the ball over, the Broncos could finally be a balanced team again and make a run for the AFC West crown. Only time will tell if that’s going to be the case. The Denver Broncos have lost four of their last five regular season home games.

I'm not all that confident in the Seattle Seahawks with the losses on defense and the questionable offensive line that wasn't good last season. Against this Denver Broncos defense, Wilson will be running for his life and is sure to turn the ball over a couple of times. We've seen how this movie ends with the Seahawks in the past. The offensive line can't protect, the running game stalls and Wilson is forced to force some things. That's not going to work against this Denver defense. This is a game the Broncos should be able to control with their pass rush and do just enough offensively to win this thing by a touchdown. I'll lay the field goal.