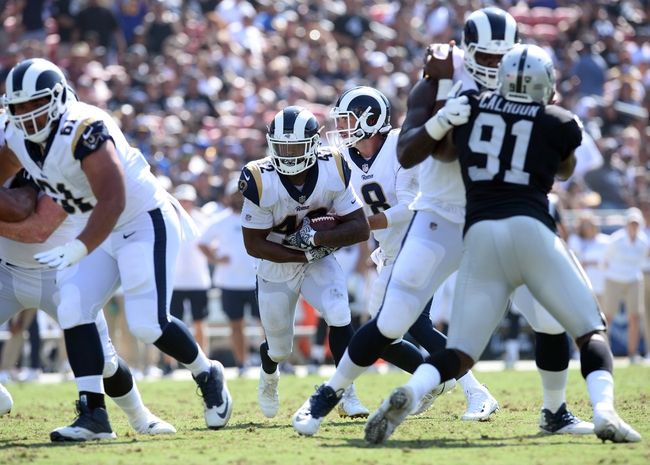 The Los Angeles Rams look to grab a statement road win to kick off their regular season as they head into the Black Hole to face off against the Oakland Raiders.

The Rams come into the 2018 regular season as a Super Bowl contender in most circles and their odds of doing so got much better with the late preseason signing of all-pro defensive tackle Aaron Donald. Los Angeles will take on a Raiders side that was also marred in a contract holdout with their former defensive player of the year Khalil Mack, but the Silver and Black went a different route as they shipped the former Buffalo Bull to Chicago for a pair of first round draft picks in a move that has left most NFL fans, players, and administration scratching their heads. The Rams have a stacked roster on both sides of the ball led by Jared Goff, Todd Gurley, Brandin Cooks, and Robert Woods on offense and Donald, Ndamukong Suh, Aqib Talib and company on defense and against a Raiders side that is still reeling from the shock of losing their best player it could make for a very long season opener with national audience watching.

The Raiders come into the season as one of the most talked about franchises since the onset of the offseason but for all the wrong reasons as the Jon Gruden return has been an absolute disaster. The Mack trade was the final straw in a long list of wrongdoings from the Raiders this offseason and for a team that struggled on defense last season with Khalil Mack it is hard to fathom they will be able to do anything of significance this season, even if they are opening up at home on Monday Night Football. Oakland will need their offense to be firing on all cylinders and the success of this team will lie solely on the shoulders of Derek Carr and Amari Cooper, with the latter already being heavily critical of his team’s defense.