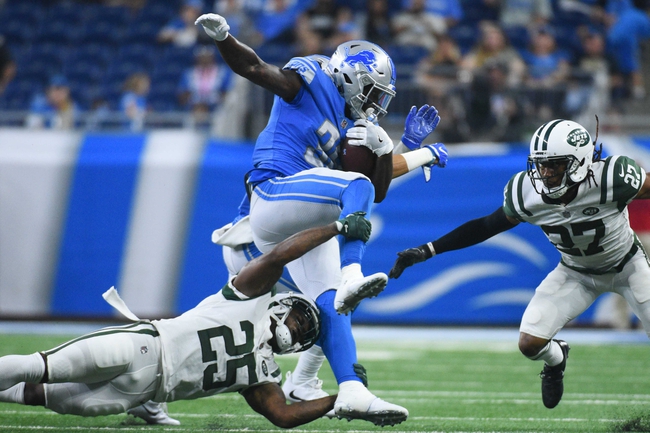 The New York Jets will visit the Detroit Lions up at Ford Field on “Monday Night Football” to kick off their NFL seasons.

New York logged an uninspiring campaign in 2017, going 5-11 and finishing in last place in the AFC East. The Jets started out well at 3-2 but couldn’t keep it going and missed the playoffs for the seventh straight year.

New York got some good flashes from their young players in the preseason, despite going 1-3 in the win/loss columns. The Jets beat the Falcons in their opener, then dropped to the Redskins, Giants and Eagles.

As for the Lions, they missed out on the playoffs as well, despite finishing at 9-7 and in second place in the NFC North. Detroit began the year at 3-1 but then lost steam as they fell in six of their final 12 games.

Detroit showed a little promise stats-wise in their preseason as well, and they also finished at 1-3. The Lions took out the Buccaneers 33-30 in the third exhibition game but otherwise lost to the Raiders, Giants and Browns.

New York has as much pressure on them as a team that went 5-11 the previous season could possibly have, as they need to show some improvement with their young talent lest the front office clean house. The good news is that the Jets have some decent playmakers on the roster and come into a manageable game here versus Detroit. I think the Jets have the goods to cover in this one—maybe even win it.