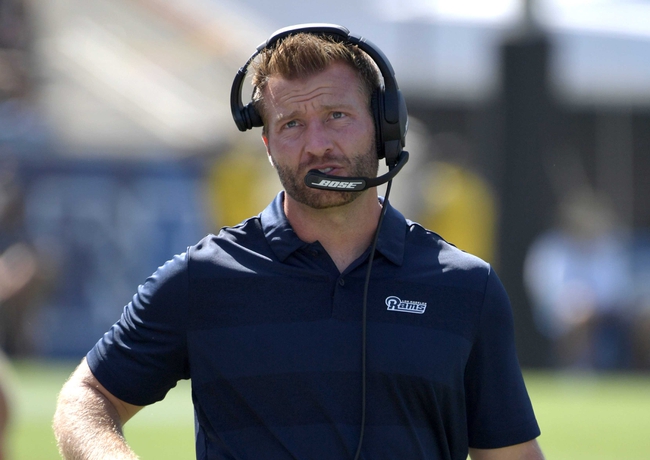 We have an AFC West division tilt to close out week 1 of the NFL regular season as the Los Angeles Rams take on the Oakland Raiders.

The Los Angeles Rams will look to build not heir first playoff appearance since 2004 after finishing the regular season with an 11-5 but the Rams’ promising season would end prematurely after falling in the Wild Card round to Atlanta by a final score of 26-13. Jared Goff retains the starting QB job after throwing for over 3,800 yards, 28 touchdowns and 7 interceptions last season. Todd Gurley will remain as the team’s lead running back after finishing with 1,305 yards and 13 TDs last season, in addition to a team-high 64 receptions for 788 yards and another 6 scores. Cooper Kupp is back after logging a team-high 869 receiving yards last season and Robert Woods is back as well, while the Rams brought in a third receiving threat after trading for Brandin Cooks from the Patriots, giving the Rams one of the most potent offensive attacks in the NFL. Defensively, Aaron Donald leads a defense that now boasts the likes of Ndamukong Sun, along with Mark Barron, Marcus Peters and Aqib Talib after finishing last year in the middle of the road in terms of total defense with just 28 sacks as a team last season.

The Oakland Raiders will look to bounce back from a disappointing 2018 campaign that saw Oakland regress back to their losing ways, cutting their win total in half from 2016, finishing with a 6-10 overall record, their 5th losing season in the last 6 years. Derek Carr returns at quarterback after throwing for just under 3,500 yards, 22 touchdowns and 13 interceptions last season, and Marshawn Lynch is back at running back after racking up 891 yards and 7 touchdowns last season. The Raiders lost top receiver Michael Crabtree, but still bring back Jared Cook who logged 54 catches and a team-high 688 receiving yards last season and Amari Cooper who added 48 grabs for 680 yards. The Raiders replaced Crabtree by prying Jordy Nelson away from the Green Bay Packers but the key for Nelson will be staying healthy. Defensively, the Raiders will be looking to improve on a pass defense that allowed the 7th-most passing yards per game at 241.1 per game last season, and improve a pass rush that logged just 24 sacks as a team last season, with Bruce Irvin up front and Marcus Gilchrist and Karl Joseph in the secondary it can happen, but with the holdout of star linebacker Khalil Mack, it might be tougher than first expected.

Laying points on the road is always a scary proposition, especially in primetime on the opening week of the season. However, the Rams are my pick to make it out of the NFC this season, as all the pieces are there for the Rams to be able to do it all this season, especially on the offensive side of the ball. The Raiders just have too many question marks for me and I need the Raiders to prove me wrong before I can instill any faith in Oakland going forward. Give me the Rams and lay the points on the road in this one.