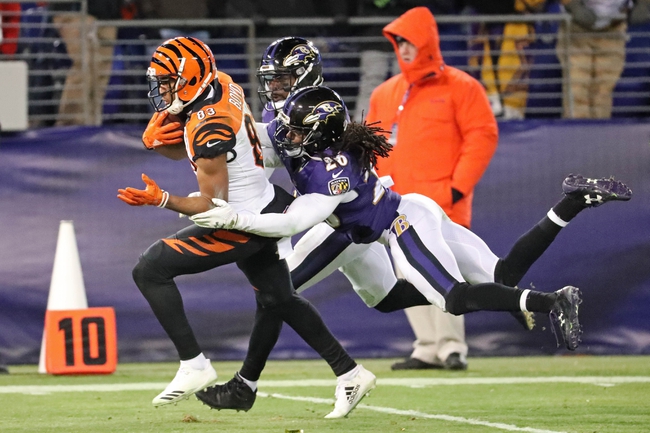 The Baltimore Ravens and the Cincinnati Bengals will meet up on Thursday from Paul Brown Stadium to kick off Week 2 of the NFL season.

Baltimore is at 1-0 on the young season, following a blowout victory at home over the visiting Buffalo Bills. The Ravens were up 26-0 at halftime in that one, and a single field goal allowed in the third quarter was the only scoreboard blemish in a 47-3 win.

In Week 1, Ravens QB Joe Flacco went 25-of-34 for 236 yards and three touchdowns, while Kenneth Dixon led the rush on 13 carries for 44 yards and a TD. Willie Snead was the top Baltimore Receiver with 49 yards and a score.

Over on the Bengals’ side, they're 1-0 as well, and played a tight game against the Colts in their Week 1 win. Cincinnati was down 16-10 going into halftime but a big 17-0 fourth quarter carried the Bengals to a 34-23 decision.

Bengals QB Andy Dalton went 21-of-28 for 243 yards, two scores and a pick in the Week 1 victory. Joe Mixon was the top Cincinnati rusher with 95 yards and a TD, and AJ Green tallied 92 yards and a score.

The Week 1 overreactions are in full swing for Baltimore, as they’re a solid team but certainly won’t put up the production they did against the stumbling Bills on a game-by-game basis. Still, you don’t put up 47 points against anyone without doing a lot of things right. Cincinnati is a bit of an enigma right now, as they’ve certainly got some talent on their roster but struggled for much of the game against a “meh” Colts team. One thing’s certain: this division is going to be fun to watch over the course of the year. I’m taking the Ravens for a hard-hitting and tight win, but otherwise staying away.