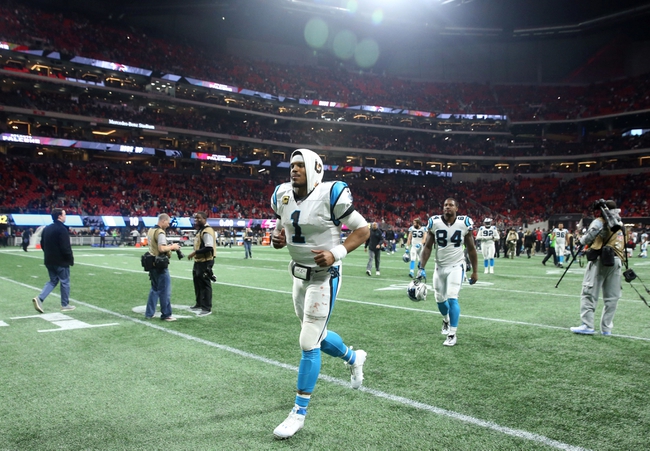 The Carolina Panthers and the Atlanta Falcons meet in an NFC South division tilt from Mercedes-Benz Stadium on Sunday afternoon.

The Carolina Panthers will be looking to stay the season with back-to-back wins after winning their season opener against Dallas by a final score of 16-8. Cam Newton threw for 161 yards on 17 of 26 passing, while also leading the Panthers on the ground with 13 carries for 58 yards and the team’s lone touchdown in the win. Christian McCaffrey led the Panthers in receiving out of the backfield with 6 catches for 45 yards. The Panthers’ D put on a clinic, combining for 6 sacks including 2 from Kawann Short and 1.5 from both Wes Horton and Mario Addison while Luke Kuechly led the Panthers with 11 tackles in the win.

The Atlanta Falcons have had a couple extra days to stew after being taken down by the Philadelphia Eagles in their season opener last Thursday by a final score of 18-12. Matt Ryan threw for 251 yards and an interception on 21 of 43 passing, while Devonta Freeman led the Falcons with 36 rushing yards and Tevin Coleman logged the Falcons’ lone touchdown in the losing effort. Julio Jones helped lead the Falcons’ offense, racking up a team-high 10 catches for 169 yards in the loss. Defensively, Deion Jones logged an interception and Brian Poole and Takkarist McKinley each added a sack while Desmond Trufant led the Dirty Birds with 6 tackles in the defeat.

It would be easy to jump on the points with the way both teams played in their opening games, but the fact is that the Panthers didn’t have much of a breakout offensively, and the Falcons shouldn’t struggle on offense for the 2nd game in a row. The Falcons’ offense has the tendency to turn these kinds of games into a track meet and the ball goes up and down the field with ease. Plus, the Panthers have lost each of their last three trips to Atlanta by a combined 34 points, or around 11 points per game, so with this being Atlanta’s home opener, I expect the home field to play into this one and give the Falcons a win by at least a touchdown.