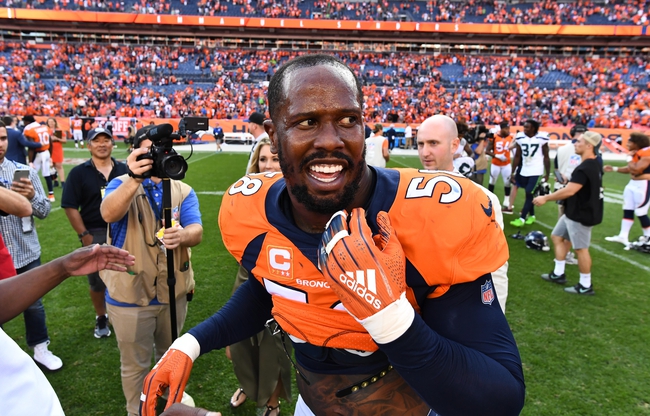 The Oakland Raiders look for a feel good victory to avoid their first 0-2 start since the 2014 season. The Oakland Raiders have lost six of their last seven road games. Derek Carr is completing 72.5 percent of his passes for 303 yards, zero touchdowns and three interceptions. Carr has two touchdown pass and six interceptions in his last three games. Jared Cook and Jalen Richard have combined for 135 receiving yards on 18 receptions while Jordy Nelson has three receptions. The Oakland Raiders ground game is averaging 95 yards per contest, and Marshawn Lynch leads the way with 41 yards and one touchdown. Defensively, Oakland is allowing 33 points and 365 yards per game. Marcus Gilchrist leads the Oakland Raiders with eight tackles, Bruce Irvin has one sack and Tahir Whitehead has one tackle for loss.

The Denver Broncos look for another home victory to start 2-0 for the sixth straight season. The Denver Broncos have lost four of their last six home games. Case Keenum is completing 64.1 percent of his passes for 329 yards, three touchdowns and three interceptions. Keenum has two or more touchdown passes in five of his last seven games. Emmanuel Sanders and Demaryius Thomas have combined for 198 receiving yards and two touchdowns while Courtland Sutton has two receptions. The Denver Broncos ground game is averaging 146 yards per contest, and Phillip Lindsay leads the way with 71 yards on 15 carries. Defensively, Denver is allowing 24 points and 306 yards per game. Todd Davis leads the Denver Broncos with eight tackles, Von Miller has three sacks and Justin Simmons has one interception.

The Oakland Raiders already have to deal with the fact they're on a quick turnaround after playing late Monday night, but now they're heading to a tough venue and have to face this Broncos pass rush. The Rams were able to pressure the Raiders a lot opening week and forced Carr into mistakes and throwaways. The Broncos are coming off a game in which they had six sacks and allowed 64 rushing yards. The Raiders are going to have trouble moving the football in this game and the struggles for Carr will continue against another aggressive defense. I'll eat the reasonable chalk with the Denver Broncos at home.