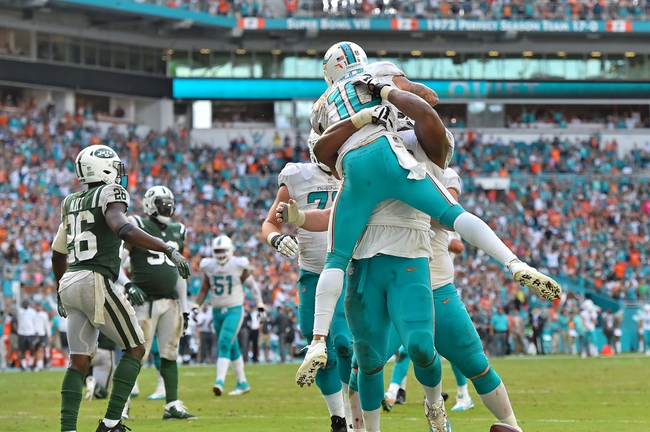 The Miami Dolphins look for a big division victory to start 2-0 for the first time since the 2013 season. The Miami Dolphins have lost each of their last five road games. Ryan Tannehill is completing 71.4 percent of his passes for 230 yards, two touchdowns and two interceptions. Tannehill has two or more touchdown passes in five of his last six games. Kenny Stills and Jakeem Grant have combined for 142 receiving yards and two touchdowns while Albert Wilson has three receptions. The Miami Dolphins ground game is averaging 120 yards per contest, and Frank Gore leads the way with 61 yards on nine carries. Defensively, Miami is allowing 20 points and 336 yards per game. T.J. McDonald leads the Miami Dolphins with eight tackles, Kiko Alonso has one pass deflection and Reshad Jones has two interceptions.

The New York Jets also look for a 2-0 start to the season, which would be their first since 2015. The New York Jets have lost four of their last six home games. Sam Darnold is completing 76.2 percent of his passes for 198 yards, two touchdowns and one interception. Darnold enters this game with 21 career pass attempts under his belt. Quincy Enunwa and Terrelle Pryor have combined for 112 receiving yards and one touchdown while Robby Anderson has one reception. The New York Jets ground game is averaging 169 yards per contest, and Isaiah Crowell leads the way with 102 yards and two touchdowns. Defensively, New York is allowing 17 points and 339 yards per game. Darron Lee leads the New York Jets with seven tackles, Jamal Adams has three pass deflections and Trumaine Johnson has one interception.

It seems like a lot of people are drinking the New York Jets kool aid after beating a subpar Detroit Lions team on Monday night, as this line has moved quite a bit since the opener. Still, we're getting free points with the better team in the Miami Dolphins. The Dolphins offense was sharp last week now that Tannehill is under center, and the defense looked fresh and created difference making plays. People forget that the Dolphins won six games last year with Jay Cutler at quarterback, so why so many are down on this club this year with improved QB play still boggles my mind. Regardless, I like the fish and the free field goal.