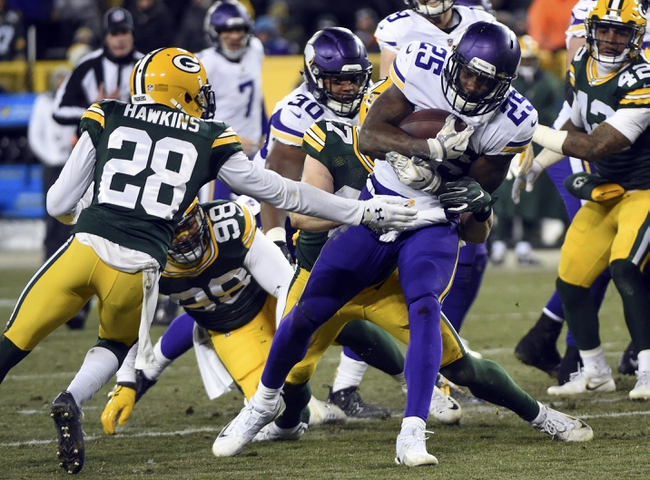 The Minnesota Vikings and the Green Bay Packers will meet up on Sunday at Lambeau Field in a great Week 2 NFL divisional matchup.

The Vikings come into this one with a 1-0 record following a 24-16 defeat of the San Francisco 49ers in Week 1. Minnesota entered the half with a 10-3 lead, then kept the pressure on by outscoring the Niners 14-13 in the second half.

Vikings QB Kirk Cousins had a decent day in Week 1 with 244 yards and two touchdowns, while Latavius Murray led the rush on 42 yards from 11 carries. Adam Thielen was the top Vikings receiver with six catches for 102 yards.

Over on the Packers’ side, they’re 1-0 and coming off an epic comeback win over their divisional rival Bears. Green Bay looked out of sorts early in that one, going into the fourth quarter trailing 20-3. The Packers were able to rattle off three touchdowns in the final period for a 24-23 victory that will long be a legend in Green Bay.

Packers QB Aaron Rodgers went 20-of-30 for 286 yards and three touchdowns in the win, with Jamaal Williams leading the rush on 15 carries for 47 yards. Randall Cobb had a great day for Green Bay with 142 yards and a TD on nine catches.

This is going to be one of those games you’ll have to watch all the way up until kickoff, just to see whether or not Rodgers will take the field (he sustained a sprained knee in Week 1 and is day-to-day). If he doesn’t end up playing, Minnesota is obviously the pick. If he does, I think Minnesota is still the way to go as their defense should give a not-so-mobile Rodgers lots of trouble. I’m going Vikings here regardless.