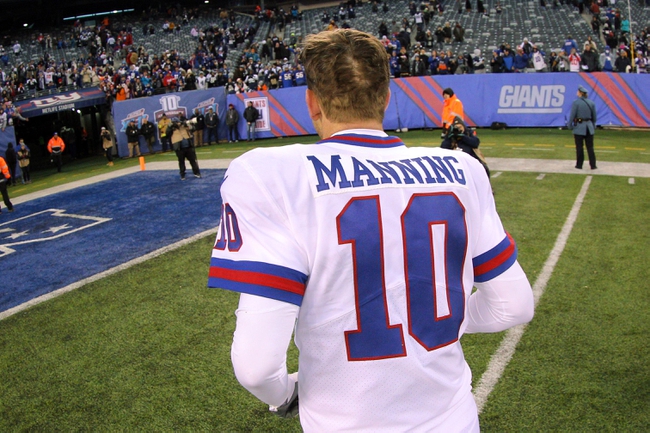 The New York Giants and the Dallas Cowboys meet in an NFC East division showdown from AT&T Stadium in NFL action on Sunday night.

The New York Giants will look to bounce back after falling to Jacksonville in their season opener by a final score of 20-15. Eli Manning threw for 224 yards and an interception on 23 of 37 passing while Saquon Barkley made quite the debut with 18 carries for 106 yards and a touchdown. Odell Beckham Jr. led the Giants’ receiving corps with 11 catches for 111 yards, while Sterling Shepard added 5 receptions for 48 yards. On defense, Janoris Jenkins led Big Blue with 5 tackles and an interception as the Giants held the Jags to just 305 yards of total offense in the loss.

The Dallas Cowboys will also be looking for their first win of the season after falling to Carolina by a final score of 16-8 in their season opener. Dak Prescott threw for 170 yards on 19 of 29 passing while Ezekiel Elliott led the Cowboys in rushing with 69 yards and a touchdown on 15 carries and Cole Beasley added a team-high 7 receptions for 73 yards. On defense, the Cowboys forced a pair of fumbles and recorded 3 sacks, including a sack from DeMarcus Lawrence who also led the Cowboys with 6 tackles in the defeat.

I said before that the Cowboys’ offense is essentially Prescott and Elliott or bust, and even that wasn’t enough as the Cowboys scored just 8 points against Carolina. I’m not saying the Giants are studs defensively, but Big Blue is a capable defensive unit and has weapons of their own in Barkley and Odell Beckham Jr. to make life hell for the Cowboys’ D. I never thought I’d say this, but this is simply a case of me trusting the Giants more than I do Dallas, so I’ll take the points with the Giants in a game I have New York winning outright.