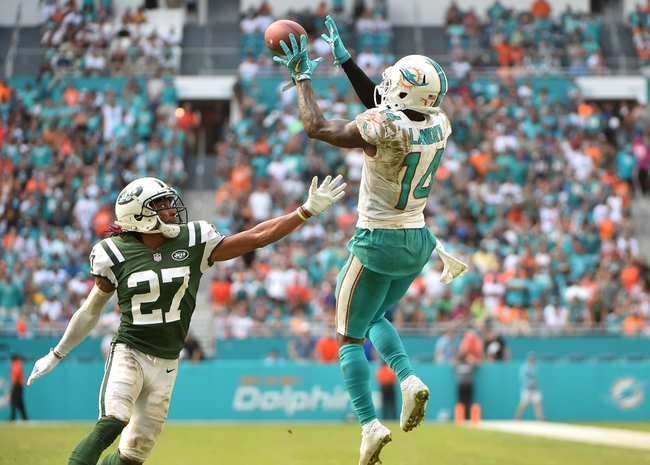 The Miami Dolphins and the New York Jets will be locking up in an AFC East NFL Week 2 battle from MetLife Stadium on Sunday.

The Dolphins come into this game with a 1-0 record so far following a Week 1 win over the Tennessee Titans 27-20. The scoring came slow initially in that one, with Miami holding a 10-3 lead heading into the fourth ahead of an explosive quarter. (And the longest game in NFL history after two lightning delays at seven hours and eight minutes.)

Dolphins QB Ryan Tannehill managed 230 yards, two touchdowns and two picks in the opening win, while Kenny Stills was the top receiver at 106 yards and both scores. Frank Gore logged nine carries for 61 yards to lead the Miami rush.

Over on the Jets’ side, they just came off a “Monday Night Football” matchup against the Lions. New York stumbled a bit with a pick-6 on their opening play but settled into a bulldozer groove for a 48-17 victory no one saw coming.

Jets QB Sam Darnold was awesome following his early mistake, throwing for 198 yards, two TDs and the one pick. Isaiah Crowell led the New York rush on 102 yards and two scores, while Quincy Enunwa logged six grabs for 63 yards and a TD.

Miami’s game was the dictionary definition of an oddball, but the important thing for the Dolphins is that opening W. As for the Jets, they don’t have a whole lot to complain about after that blowout, but New York needs to avoid getting overconfident; Detroit helped a lot in that final score. Dolphins/Jets games are some of the most fun to watch in the NFL these days, and this should be another classic. I’m staying away from this one but giving a slight edge to the Jets coming off that incredible performance.