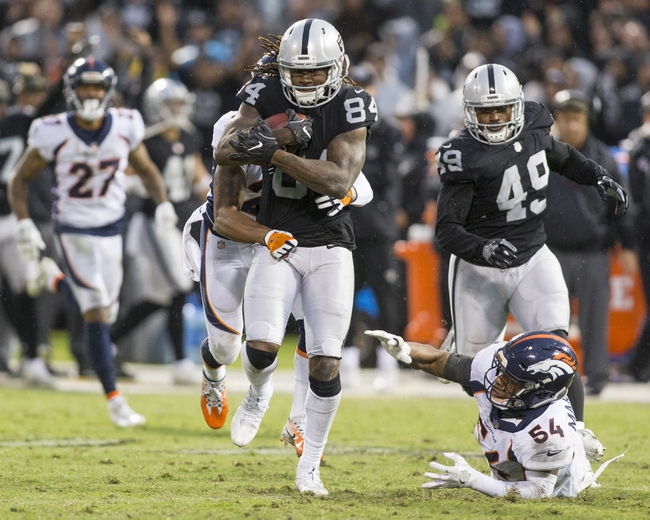 The Oakland Raiders and the Denver Broncos will lock up in a week 2 AFC West division tilt from Mile High in NFL action on Sunday afternoon.

The Oakland Raiders will look to secure their first win of the season after dropping their season opener by a final score of 33-13 in week 1. Derek Carr threw for 303 yards and 3 interceptions on 29 of 40 passing while Marshawn Lynch led the Raiders with 11 carries for 41 yards and a touchdown. Jared Cook led the Raiders with a whopping 180 receiving yards on 9 receptions while Jalen Richard added 9 catches of his own for 55 yards. Defensively, Bruce Irvin forced a fumble while Tahir Whitehead led the Raiders with 6 tackles in the losing effort.

The Denver Broncos will look to build on their season opening 27-24 win over the Seattle Seahawks in their season opening matchup. Case Keenum threw for 329 yards, 3 touchdowns and 3 interceptions on 25 of 39 passing, while Phillip Lindsay and Royce Freeman each had 15 rushes for 71 yards, with Lindsay adding a receiving TD. Emmanuel Sanders logged 10 receptions for 135 yards and a touchdown while Demaryius Thomas added 6 catches and a receiving score of his own along with 63 yards through the air. Defensively, Von Miller started the year with a bang, notching 3 sacks, 2 forced fumbles and a fumble recovery as the Broncos added a pair of interceptions and combined for 6 sacks.

The Raiders struggled to move the ball against a Rams’ defense that was average last season and now have to face a Broncos’ D that is one of the best from season-to-season. Carr and Keenum had their respective issues with the INT in week one, but the fact is that the Broncos defense always gives them a chance in these kinds of games, while the Raiders defense continues to get torn up. I’ll lay the points with the Broncos until Oakland gives me reason to otherwise.