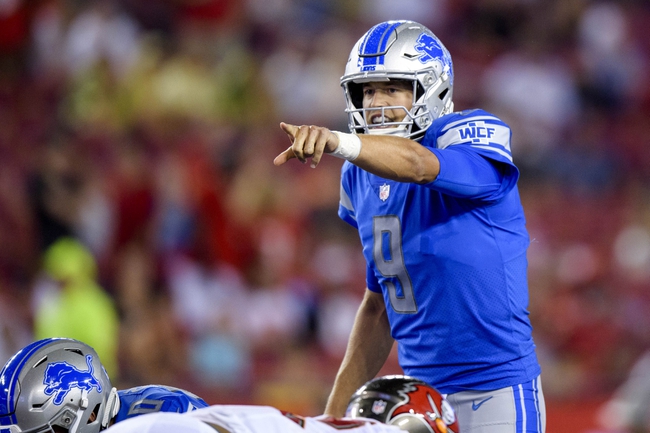 The Detroit Lions will visit the San Francisco 49ers out at Levi’s Stadium in Week 2 NFL activity on Sunday.

Detroit is coming off a Week 1 Monday night game versus the Jets. The Lions couldn’t do a whole lot of things right in their opener following a pick-6 on the first play from scrimmage. The proverbial nail in the coffin came from a 31-7 third quarter that led to a 48-17 loss.

Lions QB Matthew Stafford was beat up pretty badly in the Week 1 loss, and finished with 286 yards for one TD and four picks. Kenny Golladay was the only offensive bright spot, with seven catches for 114 yards.

Over on the 49ers’ side, they’re 0-1 following a frustrating loss 24-16 against the Minnesota Vikings in Week 1. San Fran was trailing 10-3 going into halftime but scored 13 points in the second half. Trouble was, the Vikings scored 14 in the second half to maintain the win.

Niners QB Jimmy Garoppolo posted 261 yards, one TD and three picks in a rough day at the office, while Matt Breida led the rush on 46 yards. George Kittle was the top 49ers receiver with 90 yards on five grabs.

Both of these teams are coming off disappointing results in their Week 1 games. The official Garoppolo era began on something of a sour note, and even though everyone will see San Fran coming this year I think they’ll take a step forward. As for the Lions, they’re a much better team than their Week 1 game, and although they need to clean up a LOT of issues they should get much better as the season goes along. I’m going to go with Detroit here in what should be a great matchup.