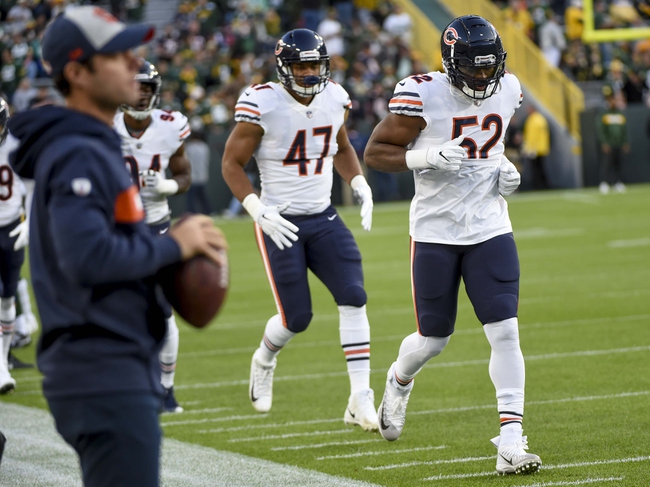 The Seattle Seahawks play another road game and hope to avoid their second 0-2 start in the last four years. The Seattle Seahawks have won five of their last seven road games. Russell Wilson is completing 57.6 percent of his passes for 298 yards, three touchdowns and two interceptions. Wilson has two or more touchdown passes in 11 of his last 12 games. Will Dissly and Tyler Lockett have combined for 163 receiving yards and two touchdowns while Brandon Marshall has three receptions. The Seattle Seahawks ground game is averaging 64 yards per contest, and Chris Carson leads the way with 51 yards on seven carries. Defensively, Seattle is allowing 27 points and 470 yards per game. Tre Flowers leads the Seattle Seahawks with eight tackles, Frank Clark has one sack and Earl Thomas has one interception.

The Chicago Bears hope to redeem themselves after the collapse against the Green Bay Packers to avoid their fourth straight 0-2 start. The Chicago Bears have lost four of their last six home games. Mitchell Trubisky is completing 65.7 percent of his passes for 171 yards, zero touchdowns and zero interceptions. Trubisky has zero touchdown passes in each of his last three games. Allen Robinson and Jordan Howard have combined for 86 receiving yards on nine receptions while Taylor Gabriel has five receptions. The Chicago Bears ground game is averaging 139 yards per contest, and Howard leads the way with 82 yards on 15 carries. Defensively, Chicago is allowing 24 points and 370 yards per game. Bryce Callahan leads the Chicago Bears with eight tackles, Akiem Hicks has one sack and Khalil Mack has one interception.

The Seattle Seahawks were simply beat up by the Denver Broncos, as they turned the ball over three times and were sacked six times while allowing eight tackles for loss. Wilson is running for his life far too often and there's not enough weapons to make his life any easier. Now, the Seahawks offesive line has to play an improved Bears front seven that includes Khalil Mack, who was unblockable opening week. This could get ugly. Yes, I'm concerned about the Bears offense and Trubisky making enough plays to get the job done, but this has more to do with the lack of trust in the Seahawks. This squad seems to be in trouble. I'll eat the chalk with the Chicago Bears at home.