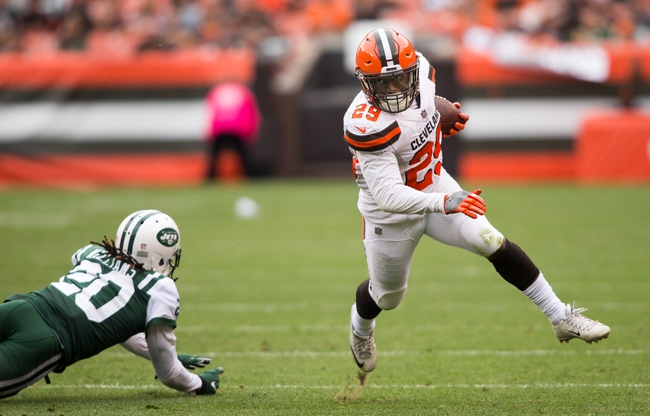 The New York Jets and the Cleveland Browns will be kicking off the NFL Week 3 action as they meet up on “Thursday Night Football” from FirstEnergy Stadium.

The Jets enter this game sitting at 1-1 on the season so far. New York came out in Week 1 and destroyed the Lions 48-17, but then put up a stinker in their home opener against the Dolphins this past Sunday, losing 20-12.

In that Miami loss, New York QB Sam Darnold finished with 334 yards, one TD and two picks, while Isaiah Crowell led an ineffective run game with 12 carries for 35 yards. Quincy Enunwa was the top New York receiver with 92 yards from seven grabs.

Over on the Browns’ side, they’re 0-1-1 thus far but could easily be undefeated if not for a handful of wayward kicks. Cleveland tied the Steelers 21-21 in Week 1 and lost a tough one to the Saints 21-18 in Week 2.

In that New Orleans loss, Browns QB Tyrod Taylor posted 246 yards, one TD and one pick, while Carlos Hyde managed 43 yards and a score on the ground. Antonio Callaway was the top Cleveland receiver with 81 yards and a TD from three catches.

The Browns have officially graduated from “punching bag of the league” status following their pair of solid efforts against two good teams. Cleveland has addressed their kicking issue as well, and (finally) appears to be taking a step forward toward relevance again. As for the Jets, their fortune in Week 3 depends on which version of the team we’ll get here: will it be the squad that did everything right in Week 1? Or the team that flushed that momentum down the toilet against a divisional opponent in their home opener? Those questions have me avoiding this game for all practical purposes, but the Browns have got to win at some point, right? I’ll take Cleveland and the under—so long as both defenses (who are decent when they’re running on all cylinders) show up.