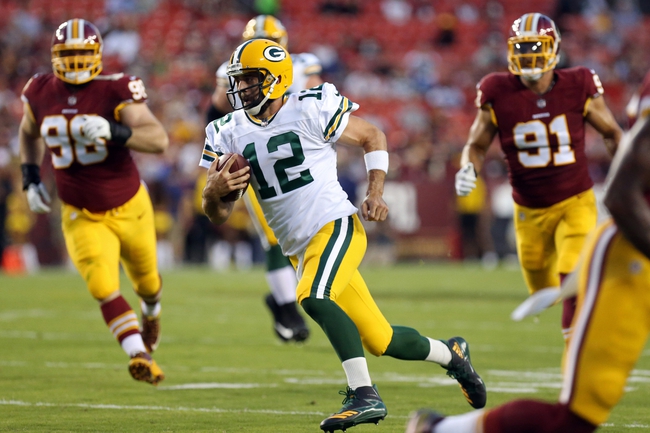 The Green Bay Packers will meet the Washington Redskins at FedEx Field on Sunday in Week 3 NFL action.

The Packers come into this one at 1-0-1 so far. Green Bay posted an epic comeback win 24-23 over the Bears in Week 1, then (following a controversial penalty on a sack) managed a tie with the Vikings 29-29 this past Sunday.

In the Minnesota game, Packers QB Aaron Rodgers put up 281 yards and one TD, while Jamaal Williams led the rush with 59 yards on 16 carries. Jimmy Graham was the lead Green Bay receiver on six catches for 95 yards.

Over on the Redskins’ side, they’re sitting at 1-1 on the young season. Washington took care of the Cardinals in Week 1 24-6, but then fell to the Colts at home 21-9 in their Week 2 matchup.

In the Indy game, Redskins QB Alex Smith logged 292 yards on 33-of-46 passing, with Chris Thompson leading the receivers on 13 catches for 92 yards. The Redskins didn’t have much of a running game, with Adrian Peterson toting 11 times for 20 yards.

Green Bay is likely feeling pretty annoyed right now, as a very controversial penalty cost them a divisional victory in Week 2—and has since been discussed at length pretty much everywhere. As for the Redskins, they were thoroughly outplayed by a “meh” Colts team last week and have a tough job here. I’m a little concerned about Rogers’ mobility right now, but even hobbled he’ll be the best player on the field. This is probably a game to stay away from, but I’m hesitantly taking the Packers, assuming that on the other side Smith doesn’t have one of those stellar games he puts up every once in a while.