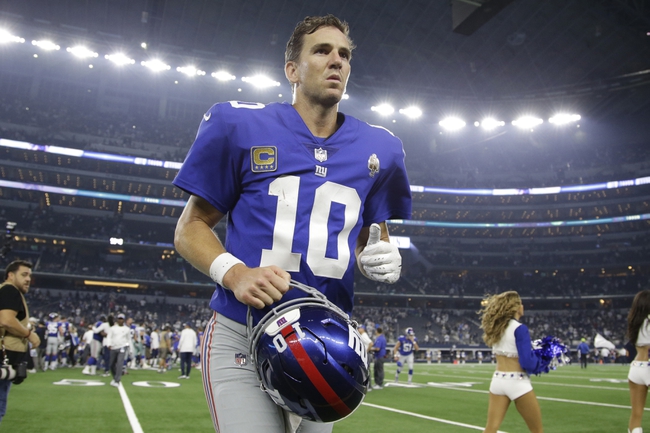 The New York Giants and the Houston Texans meet in week 3 NFL action from NRG Stadium in Houston on Sunday afternoon.

The New York Giants will look for their first win after falling to 0-2 with a 20-13 loss to Dallas on Sunday night in week 2. Eli Manning has completed 69.1% of his 81 pass attempts for 503 yards while Saquon Barkley leads the Giants in rushing with 134 yards and a touchdown through his first two games. Odell Beckham Jr. has a team-high 162 receiving yards on 15 catches while the aforementioned Barkley edges out OBJ with 16 catches through week 2. Janoris Jenkins leads the Giants defence with 10 tackles and an interception so far this season. As a team, the Giants are averaging 289.5 yards of total offense and 14 points per game while allowing the 6th-fewest total yards per game with 301.5 and the 2nd fewest passing yards per game with 164 per contest this season.

The Houston Texans will also be looking for their first win after dropping to 0-2 with a 20-17 loss to the Tennessee Titans last time out. Deshaun Watson has thrown for 486 yards on 59.1% passing with 3 touchdowns and 2 interceptions while Lamar Miller leads the Texans’ ground attack with 166 rushing yards and DeAndre Hopkins has a team-high 14 catches for 188 yards. Kareem Jackson leads the Texans’ D with 11 tackles while D.J. Reader leads Houston with a pair of sacks this season. Houston is averaging 381 yards of total offense per game through week 2, including a league-best 157.5 rushing yards per game along with 18.5 points per game.

I keep saying that it’s going to be the time for New York to finally break through, and I’m almost at the point where I’m done believing in the G-Men, but I’m going to give New York one more shot. The Texans have some weapons offensively, but their first two losses came to New England without their top receiver (which isn’t anything to sneeze at), but then lost to the Titans who had Blaine Gabbert under centre. Yes, the same Gabbert that I’m not a fan of and the same Gabbert who has a record of 12-34 as a starter in the NFL. I’m going to take a shot that New York finally breaks through so I’ll take the points, but this is probably a game to just stay away from.