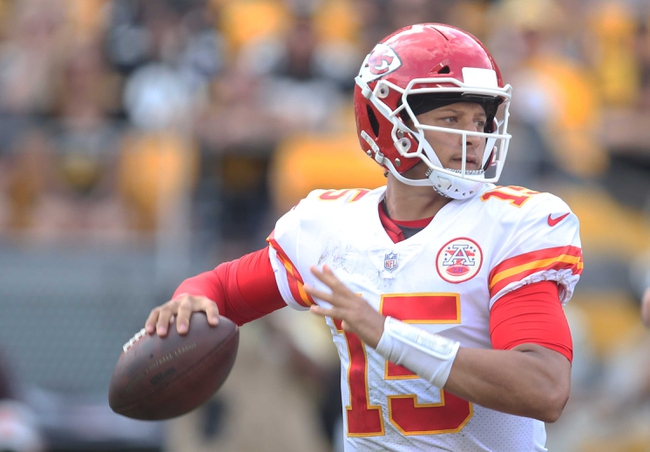 The San Francisco 49ers will visit the Kansas City Chiefs at Arrowhead Stadium in Week 3 NFL activity on Sunday, September 23.

The Niners enter this game at 1-1 on the young season. San Francisco fell to the Vikings in Week 1 24-16 but bounced back to edge out the Lions 30-27 in their second game.

In the Detroit victory, 49ers QB Jimmy Garoppolo returned to form on 206 yards and two TDs, while Matt Breida logged 138 yards and one TD on the ground. Tops in receiving for San Francisco was Pierre Garcon, with 57 yards off four grabs.

Over on the Chiefs’ side, they’re currently sitting at 2-0 after a pair of games. Kansas City took out the Chargers 38-28 in their opener, then managed to topple the Steelers in a high-scoring affair 42-37 this past Sunday.

In that Pittsburgh game, Chiefs QB Patrick Mahomes went off for 326 yards and a whopping six TDs, while Travis Kelce saw most of the work with seven grabs for 109 yards and two scores. Kareem Hunt wast the top KC rusher with 18 carries for 75 yards.

This should be a pretty interesting matchup. Most people figured the 49ers would show some immediate improvement—which they have—but no one really saw the Chiefs lighting it up this early in the season. The quality of competition KC has taken out so far is quite a bit tougher than what the Niners have dealt with, and playing at Arrowhead I think this is the Chiefs’ game to take.