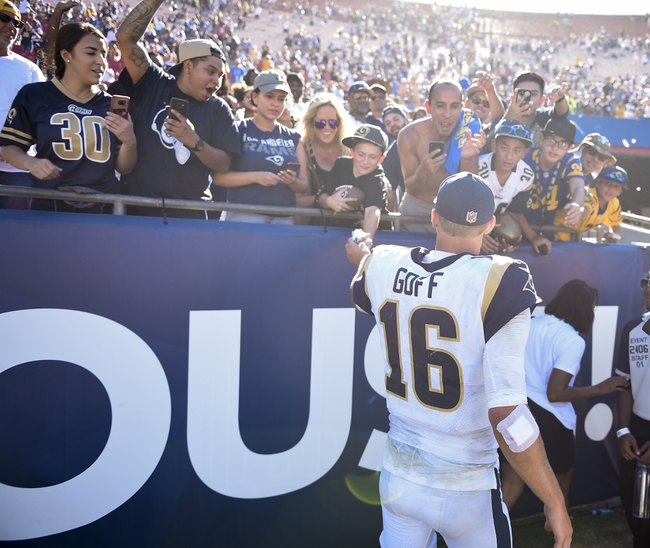 The Los Angeles Chargers will look to build on their first win of the season in the form of a 31-20 win over Buffalo in their last outing. Philip Rivers has completed 73.1% of his 78 pass attempts for 680 yards and 6 touchdowns with an interception while Austin Ekeler leads the Chargers with 116 yards on 16 carries. Keenan Allen leads the Chargers with 175 receiving yards on 14 receptions while Melvin Gordon has racked up a team-high 15 catches for 140 yards and a pair of touchdowns. Defensively, Derwin James has made quite the impact in his rookie season, with a pair of sacks and a team-high 9 tackles for the Chargers. As a team, through the first two weeks of the season, the Chargers have the 3rd-highest total offense with 445 yards per game and the 3rd-highest passing yardage per game with 329 yards per game through the air, in addition to 29.5 points per game.

The Los Angeles Rams will look to remain unbeaten after starting the year 2-0 with a 34-0 win over Arizona in their last outing. Jared Goff has thrown for 587 yards of total offense with 3 touchdowns and an interception on 64.6% passing. Todd Gurley II leads the Rams’ ground attack with 150 rushing yards and 3 touchdowns while Brandin Cooks leads his new team in receiving with 246 rushing yards on 12 receptions. Defensively, Cory Littleton and John Johnston each have an interception and are 1-2 on the team in tackles with Littleton leading the way with 14 tackles compared to Johnson’s 12. As a team, the Rams are averaging 398.5 yards of total offense per game with the 5th-highest scoring offense in the league at 33.5 points per game while also allowing the fewest points per game in the league with 6.5 points against per contest.

I’m really not trying to pick between these two sides as you have the Chargers who have a loaded offense but haven’t given us anything besides a win over the lowly Bills, going up against a Rams squad that has it going on offense and defence, but have wins over Oakland and Arizona who aren’t the most intimidating teams in the NFL. Instead, I’m going to side with the over. It’s only a matter of time before the Rams’ defence gets a couple of holes poked in it and both teams have some serious offensive talent. I’m surprised this total isn’t above 50, so I’ll side with the over in a game I see both teams hitting the high 20s in.