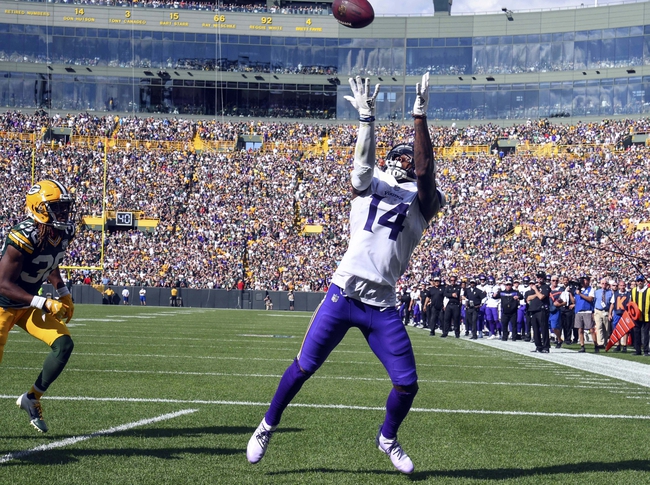 The Buffalo Bills and the Minnesota Vikings meet in week 3 NFL action from U.S. Bank Stadium on Sunday afternoon.

The Buffalo Bills will be looking for their first win of the season after falling to 0-2 after dropping a 31-20 decision to the Los Angeles Chargers in their last outing. Josh Allen has completed 50% of his 48 pass attempts for 319 yards and a touchdown with 2 interceptions. LeSean McCoy is Buffalo’s leading rusher with just 61 yards while Zay Jones leads the Bills in receiving with 5 catches for 89 yards this season. Lorenzo Alexander is Buffalo’s leading tackler with 13 tackles and a sack this season. Through their first two games, Buffalo is averaging just 223 yards of total offense and 11.5 points per game, both 2nd-worst in the NFL through week 2.

The Minnesota Vikings will look to continue their unbeaten run after finishing their week 2 matchup with Green Bay in a 29-29 tie after missing a pair of field goals in overtime. Kirk Cousins has completed 65.5% of his 84 pass attempts for 669 yards, 6 touchdowns and an interception. Dalvin Cook leads the Nikes in rushing with 78 yards on 26 carries, while Adam Thielen is Minnesota’s leading receiver with 18 receptions for 233 yards and Stefon Diggs leads the Vikings’ receiving corps with 3 touchdowns on the year. Harrison Smith leads the Vikings with 12 tackles and an interception while Danielle Hunter boasts a pair of sacks to start the year. Through their first two games, Minnesota is averaging 411.5 yards of total offense and 26.5 points per game as a team.

I know this is the NFL and all of these guys are pros so laying over two touchdowns is something you don’t normally want to do. However, the Bills are the worst team in the league in my opinion, as they have the worst receiving corps and the defence is brutal. You know something’s bad when players are retiring at halftime the way defensive back Vontae Davis did. The Vikings are sure to be upset after missing two game-winning field goals in overtime and will have it drilled into themselves all week to not let it get to that point with the Bills. All in all, I see Minnesota taking this game in blowout fashion so I’ll lay the points.